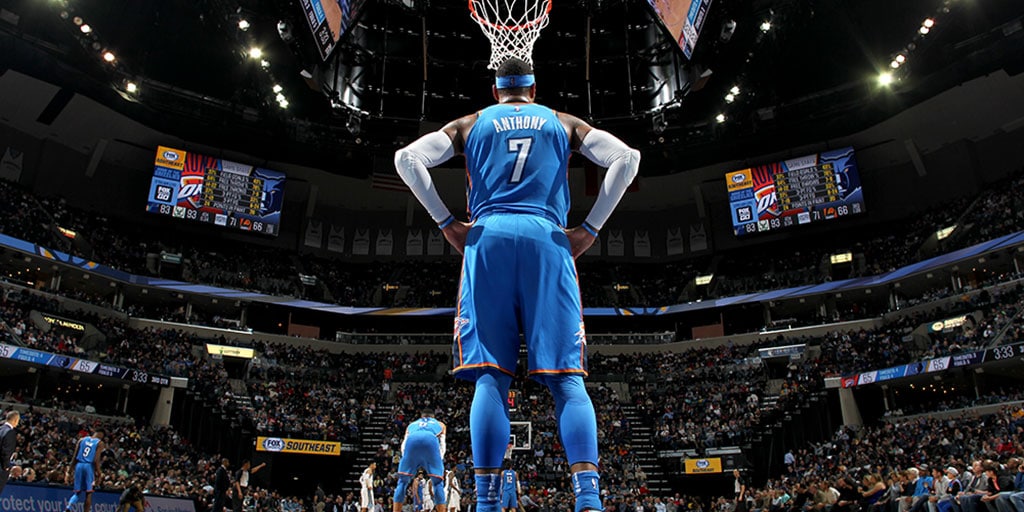 With their win over Lonzo Ball and the Lakers at Madison Square Garden on Tuesday night, the Knicks climbed above the .500 mark for the fourth time this season. While the Knicks haven’t been playing with the consistency of a playoff-bound team, their win against the Lakers does guarantee that they’ll have a better record than the Thunder when Carmelo Anthony returns to the Garden on Saturday night.

According to data from TicketIQ, Melo’s return to MSG has the second-most expensive price for Knicks tickets at Madison Square garden this season, behind only the Warriors game on February 28. While everyone expected an expensive ticket for Melo, very few pundits would have predicted that the Knicks would have a better record than the Thunder and their ‘big-three’ of Russell Westbrook, Melo, and Paul George.

Compared to other notable ‘return-games’, Melo’s return to MSG is over 80 percent more expensive than prices last year for Kevin Durant’s first game back in Oklahoma City as a member of the Warriors. The cheapest ticket for Durant’s return last season was $122, while the cheapest ticket to see Carmelo on the secondary market is $226. That ‘get-in’ price trails only the Sixers’ Christmas-day game for most expensive ‘get-in’ price, which has cheapest tickets starting at $232. While tickets on the secondary market are one option, the cheapest ticket on Knicks.com is currently available in section 400 for $199. Additionally, the team site has lots of tickets that are not available in the secondary market, including the East Balcony section. With a bird’s eye view of the action, these tickets in section 305 are a fan favorite. With a price-tag of $239 each, they’re also not going to break the bank. 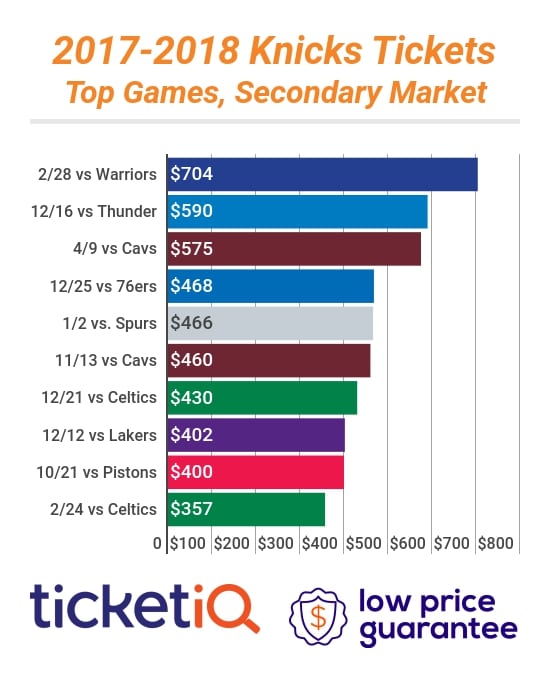 Over the next two weeks, the Knicks will play five of their most expensive games for the 2017-18 season, and the results of those game may go a long way in determining whether they’ll be contending into the new year. While the Thunder game is highly anticipated because of Carmelo, the December 21 visit from the Celtics will tell the Knicks and their fans more about how they stack up against the top teams in the East.

After the Thunder and Celtics game, the Knicks will welcome in the new-look 76ers in for a Christmas day matchup, which is currently the fourth most expensive game of the season. While the Sixers rank behind the Thunder and the Celtics game the week after, at $232 it has the most expensive ‘get-in’ price for any of the marquee December and early January matchups. The Knicks open the new year against the perennially competitive San Antonio Spurs, who will have Kawhi Leonard back for their visit to New York City.

For Knicks fans looking to see the Knicks on the cheap, they’ll either have to wait until February when games against the Hawks, Bucks and Wizards all have ‘get-in’ prices under $100. For fans that can’t wait that long, the best deal for a Knicks game in New York City won’t be at Madison Square Garden, it will be at Barclays center when the Knicks visit the Nets Thursday night. For that game, the cheapest ticket is available for under $50, which is about half the price of the Nets visit across the river at the end of January. If the Knicks are still in playoff contention then, prices may be a lot more expensive than they are today.

TicketIQ has a Low Price Guarantee for every Knicks game at Madison Square Garden this season. If you find the same ticket for less, TicketIQ will give you 200 percent of the difference.