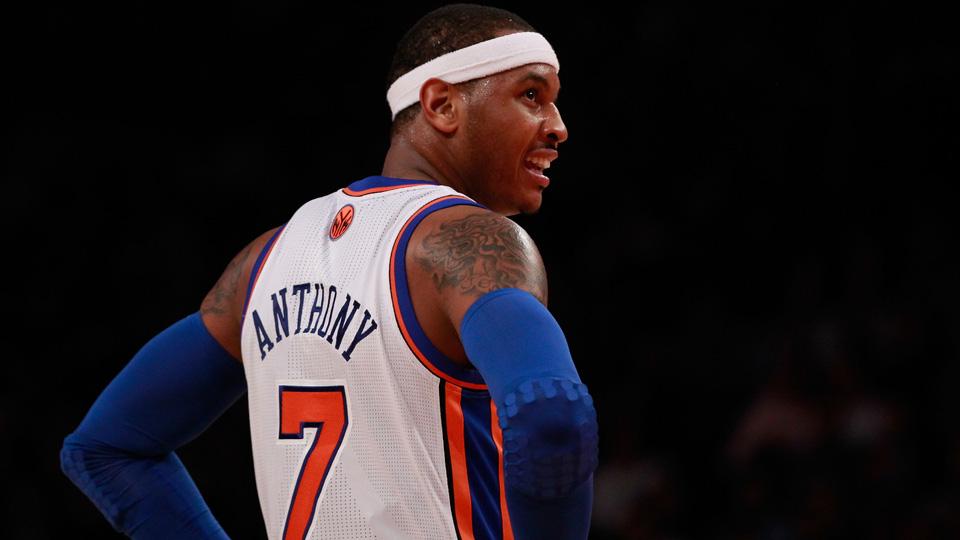 Carmelo Anthony plans to sit tight and help the New York Knicks through their painful rebuilding project, saying he can’t even fathom asking the team to deal him away.

(The Knicks potentially initiating the process, however, is another matter altogether.)

Anthony, 31, thinks his prime as a superstar has a few more years to go, and he wants to spend them all in the Big Apple.

Carmelo said he's bought into Phil's vision and "hell no" when asked if he would get to a point when he'd ask for a trade.

Carmelo says "hello no" in response to a question to whether he'd ever request a trade. No kidding. He has a no trade clause. He's got power

Melo, who is fully recovered from last season’s knee troubles, insists that he’s fully onboard with team president Phil Jackson’s long-term plan for the Knickerbockers.

“No, hell no,” Anthony said after Monday’s practice. “I already came this far. That doesn’t even come across my mind at this point.”

The Knicks took (Kristaps) Porzingis, a 7-3 project from Latvia, with the No. 4 pick when more known commodities Justise Winslow, Emmanuel Mudiay, Willie Cauley-Stein and Stanley Johnson were available. […] Anthony said he didn’t know anything about Porzingis and had to YouTube highlights of him to see who he was and how he played. But Anthony said he was bothered by reports that he was upset and felt betrayed by the Knicks, among other things that were linked to him but never explicitly said by him.

“There’s a long list,” Anthony said. “The draft pick was one. Me waiving my trade clause is two. Me not wanting to be here is three. Just every day it was another team that I was going to be traded to. I was in everybody’s trade this offseason, so after a while, at first it’s like OK, I know it’s not true, it’s stupid. Then after a while it gets old. You start hearing the same thing from a different source every day, a different team every day. You’ve got to walk around and you’ve got to hear the people, fans are asking, you’ve got to deal with that everywhere you go, family, downtown. So things like that start to get overwhelming at times.”