Carmelo Anthony Wants to Be a Top-3 NBA Player 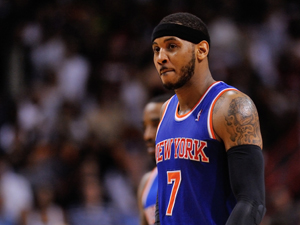 According to Carmelo Anthony’s personal trainer, the New York Knicks’ slimmed-down superstar forward isn’t just looking to be more of a facilitator. Melo intends to be mentioned alongside LeBron James and Kevin Durant. Per the NY Post:

“Amazing people have been hired over there and he wants to come in as the leader and a top-three player in the world,’’ Idan Ravin said, adding Anthony wants the Knicks to follow his lead. “If [he’s] being meticulous, you should not just follow [his] word, but follow [his] actions.’’

Ravin and Anthony have trained a large amount in Los Angeles, where Anthony has a second home. Anthony’s rigorous training and diet plan began in mid-May and some drills were “tweaked’’ to make them more “challenging,’’ Ravin said.

The trainer, whose other full-time clients are Chris Paul and J.R. Smith, said Anthony’s dedication has been astounding. He said there was no specific diet regimen, though eliminating carbs is a staple. […] “He’s just tenacious with his training,’’ Ravin said. “He’s working out very hard, ramped it up, being even more meticulous. He’s been super diligent on his diet, extra cardio, rest. A lot of amazing people were hired [by the Knicks] and he’s excited about it. It’s another example of Melo trying to be super prepared.’’