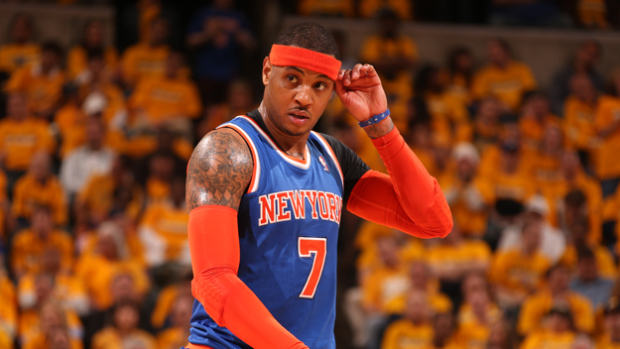 The free agency tour has begun in earnest for Carmelo Anthony, but according to the NY Post, Melo’s better half might ultimately have the final say. La La apparently loves life in the Big Apple and doesn’t want to move again:

The Brooklyn-born Anthony begins a four-city free-agency tour in the Windy City after which many league sources believe he will still be blown back into a Knicks uniform. Still, the Second City has the best chance of stealing him from Phil Jackson.

However, according to two sources, Anthony’s wife, La La Vasquez, also a Brooklyn native, is very happy in New York and is opposed to Melo leaving the Knicks. He became a free agent for the first time in his career at 12:01 a.m. Tuesday, but Anthony said in a video interview posted last week he’s worried about uprooting his family and 7-year-old son, Kiyan.

“There’s reason to believe he’s staying,” said one individual with ties to Anthony’s inner circle. “There’s just too much money out there. He’s doing to the right things, though. He’s got to make the rounds.”