Cavs and LeBron ARE Talking 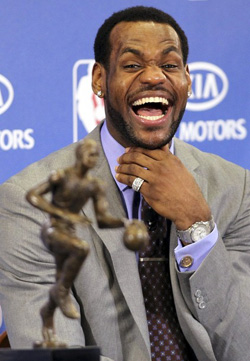 The Cavs unwillingness to discuss communications with LeBron, and James’ lack of involvement with the Cavs coaching search fueled prognostications that LeBron and the organization stopped communicating.

But as Brian Windhorst of the Cleveland Plain-Dealer reports, that doesn’t mean diddly.

According to both a team source and a source close to James, the Cavs and the two-time Most Valuable Player continue to be in contact. Both sides said the communication has been standard for the off-season.

James has met face-to-face with team officials recently, and the Cavs’ front office has been in regular contact with Leon Rose, James’ agent.

The Cavs have been in contact with all of their potential free agents, including Shaquille O’Neal, Zydrunas Ilgauskas and Jawad Williams.

LeBron is merely doing his due diligence. Asking questions and doing research on the other teams is proper business. To assume he’s lost interest in the Cavs is ignorance.

The fact that an article had to be written about LeBron’s (still open) communication with the Cavs says it all about Cleveland’s frenzy to re-sign LBJ.

LBJ is not gone, people. He’s just out, for the time being.