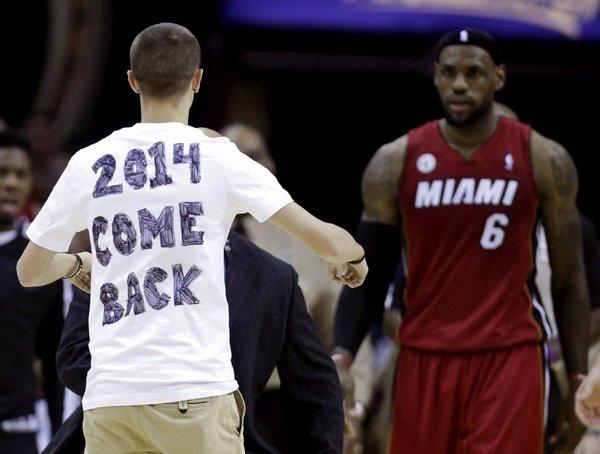 In the world of Cleveland sports, time heals all wounds (and evidently, transgressions are also forgiven.) The Cavaliers have lifted an arena ban on James Blair, a LeBron James super-fan who bum rushed the court in March 2013 to personally let his hero know how much the city missed him.

Blair, arguably the biggest LeBron fan on Earth, is obviously thrilled that he’ll get to watch LBJ in person once again. Per the AP:

The Cavaliers said Monday the team met with Blair and decided to lift the indefinite ban after it was deemed he did not pose a security risk. The team began reviewing Blair’s ban before James re-signed with the Cavs as a free agent this summer.

A team spokesman said James was not consulted in the review of Blair.

At the time of the incident, James said he didn’t feel endangered by Blair. […] “He said he missed me and come back, please,” James said. “It happened once before in (Madison Square) Garden, so I wasn’t worried. There are metal detectors here, so we were OK. I embraced it.”

Guess I waited long enough and everyone keeps asking so.. YES my ban is lifted and I cant wait to enjoy the games at the Q with everyone!