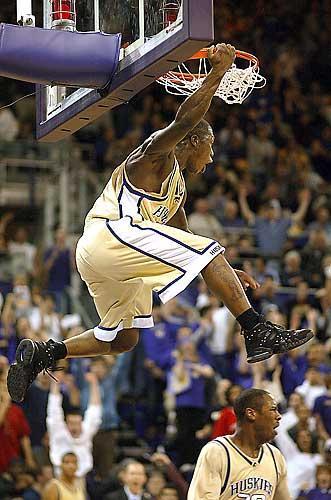 As you may or may not realize, Knick guard Nate Robinson is a Nike athlete. Like, for real. One of the Force guys, actually, along with dudes like Amare Stoudemire, Jermaine O’Neal and Al Harrington. He’s even got his own version of the Air Force 25, in Knicks colors, printed with his image. There’s a pair on top of his locker, and he sent other pairs to his brothers, who are still in high school.

Yet look at his feet before his latest game, and he isn’t wearing AF25s. Instead he’s in an all-white version of the CB94, a Max shoe that was Charles Barkley’s signature kick back in (duh) ’94. Re-released in the past couple of years, it quickly became Robinson’s favorite shoe. He wore it at Washington, and has been wearing it for a good portion of this season.

Here’s the thing, though. Nike isn’t making them anymore, at least not in the basic black and white colorways. And Nate is always looking for more. While he says a pair lasts him up to 20 games, he still doesn’t have enough (especially in black). And since Nike no longer has them in stock, he’s been having a friend buy pairs for him on eBay. For real!

So if you have any new CB94s in all white or all black in a size 11, holla at the Knicks. Maybe you can work out a deal.