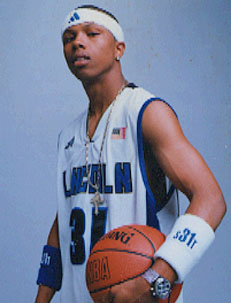 Nothing’s officially official yet, but it appears that Sebastian Telfair’s latest run-in with The Man will make him an ex-Celtic.

“The facts and circumstances of his case have not been determined, but he does not have a Celtics locker and we do not anticipate that he will,” [team managing partner Wyc] Grousbeck said in an e-mail. He did not say how the team would handle the remaining season on Telfair’s contract.

It’s obvious that the Celtics won’t have any trouble paying Telfair even if he isn’t with the team. After all, I think they’re STILL paying Vin Baker. But one does have to wonder if this would have been a waivable offense (caught speeding with a suspended license and a loaded handgun under the passenger seat) had Telfair played more like the lottery pick he once was and less like a late-season call-up from the D-League. Just ask Zach Randolph (although Z-Bo was smart enough not to be driving—and to have a concealed-carry permit, yikes). It probably didn’t help that this latest incident took place so recently after the tragedy at Virginia Tech.

Bassy’ll most likely still be in the NBA next year. After all, he’s only 21 years old, and despite his underwhelming stats, he’s still shown flashes of what made Portland select him with the 13th overall pick of the 2004 NBA draft. (He definitely outplayed cousin Stephon Marbury in a preseason game at MSG before having to leave in the second half, for, um, OK nevermind.)

The best part of this latest story, though? Apparently it’s his girlfriend’s gun AGAIN.

[Telfair’s attorney, Ed] Hayes said the gun was registered to Telfair’s girlfriend, whom he said was Telfair’s common law wife, and that Telfair was borrowing the SUV she normally uses.

You’ll recall it was apparently his girl’s gun that he was caught with while boarding the Blazers team plane a little over a year ago. Maybe Bassy needs to hire TSA agents to work at his house and garage. Or hire a bodyguard for his girl.

Turn it around, Sebastian. Before it’s too late.