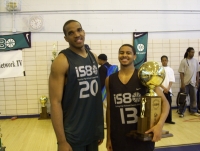 By Jay Mumford (aka J-Zone)

For those not in the loop, the IS8 Nike Spring High School Classic is somewhat of a Litmus test for a high school ball player in the Northeast. Those looking to see how much game they really have by playing against the top competition in the region may do so, for better or for worse (weak play will get you Martin Lawrenced over the PA system). A rite of passage for AAU studs, the motto is silk-screened on every game jersey, “Bring your name, not your game”. Stars are born and imposters exposed on a regular basis, and everybody from Sebastian Telfair, to Lebron James, to Ben Gordon to Rafer Alston has gone through this wringer in Jamaica Queens, NY. And as any fan or ball player in the NY area can tell you, Championship Sunday at IS8 is serious business, and in many cases, a foreshadowing of some of the following year’s NCAA Freshman class.

So while the Cavs and Celtics were fighting for their playoff lives in New Edition land, two northeast AAU powerhouses were doing the same in Pharoahe Monch’s old junior high school gym on 167th Street. Unfortunately, this game didn’t come down to a missed three pointer and some Ray Allen free throws. Similar to the Fall Championship game in 2007, the Shooting Stars- and more specifically Samuels- were simply too much for the Playaz.

After opening a 7-2 lead behind Samuels doing what he does – being a man amongst boys- and Jones filling it up from long range, Gaston contributed a seven point quarter to pull the Playaz relatively close. The fact that they only trailed 31-25 at the end of the first quarter and Rosario (their leading scorer) hadn’t even scored yet was a definite sign of a pulse and evidence that this may be a close one. Well, all good things must come to an end and in the second quarter they did for the Playaz. Convincingly. Once Ebanks and Walker got into the flow of the game, the Shooting Stars opened up a 62-41 halftime lead and never looked back. In the second half, the game was never even remotely within reach for the Playaz, but we did get an outstanding 41 point showing from Fontan as he scored in a laundry list of ways. Fordham got a steal by signing the St. Anthony’s (Jersey City, NY) guard and his teammate Estwick, as they can pour it on you in a variety of ways and play with no fear. Rosario eventually got going himself and Chaney put down a solid fourth quarter as well, but it was essentially a 2007-08 Knicks vs. Celtics game (although I’d take the Playaz’ starting 5 over the Knicks’ anyday).

The final score read 122-104, but anybody that saw the game can tell you it wasn’t that close. Samuels bullied, bruised, smashed, dunked, swatted and ten foot jumpered his way to the Game MVP with 29 points and Fontan grabbed the sportsmanship award with his 41 point excursion. The Shooting Stars have created a mini-dynasty in this tournament and a Bergtraum-Lewis/ Lincoln-Boys High style rivalry (using NYC Public School Athletic League terms) with the Playaz Club. Regardless of the outcome, these games are always an exercise in AAU intensity and a look at some of the region’s best before they advance to the next level.

Soon to be Florida Gator Allan Chaney recognizes the importance of IS8 in this region. “This was my second time in the Championship game. The tournament is one that all high school players should play in because of the atmosphere and most of the kids that do play are top players”, said Chaney. “Its one of the hardest tournaments to play in, if not the hardest. So everyday you play you have to bring your game and heart.”
EXTRA SAUCE

During halftime, Devin Ebanks-who had de-committed from Indiana- announced that he will be playing at West Virginia University in the 2008-09 season. Ebanks, along with local studs Darryl “Truck” Bryant and Kevin Jones, will cap off some great scouting work in the NY area from Bob Huggins’ program. All three of these young men should make an impact at the next level. At this point its pretty clear that many top prospects from the NY area aren’t foaming at the mouth to play at St. Johns., but I still feel its worth noting that all 3 of these players were missed out on. Great job. And D’Antoni is coaching the Knicks. Oh well, there’s always high school ball for the NY basketball fan…and IS8 in the spring and fall.