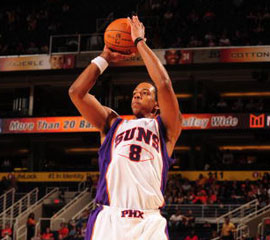 Free agent forward Channing Frye is headed to Orlando according to multiple reports, joining the Magic on a four-year, $32 million contract. Per the Orlando Sentinel:

In an effort to stretch the floor and add someone who can mentor their legion of young players, the Orlando Magic have reached an agreement with free-agent power forward Channing Frye on a four-year, $32 million contract.

After Frye missed the entire 2012-13 season because of an enlarged heart, he staged an impressive return last season. He averaged 11.1 points and 5.1 rebounds per game for the Phoenix Suns and appeared in all 82 of the Suns’ games.

Magic officials likely view his long-range shooting as an asset that can create space for youngsters such as Victor Oladipo, Elfrid Payton, AaronÖ Gordon, Maurice Harkless and Tobias Harris to attack the rim.