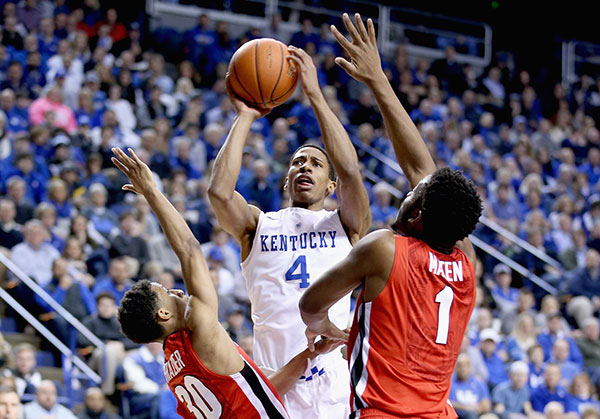 University of Kentucky guard Charles Matthews has announced that he will transfer from the powerhouse after one season in Lexington. The 6-6 guard played in all 36 games and averaged 1.7 points and 1.6 rebounds per contest. UK did not put any restrictions on his next college choice.

Matthews is just the fifth player to transfer from Kentucky during the Coach Cal era. The others are Ryan Harrow, Kyle Wiltjer, Darnell Dodson and Stacey Poole.

“I believe he is going to be a productive college player who has the ability to play at the next level,” UK Coach John Calipari said in a news release. “I know Charles’ best basketball is ahead of him, and while I’m a saddened to see him go, I support his decision and will help in any way I can.”

“I want to thank the coaches, my teammates and the Big Blue Nation for all their support this season,” Matthews said in a news release. “I gained great experience during my freshman year at Kentucky. This was a difficult decision for me, but at the end of the day, I felt like it was in my best interest to explore other options.”