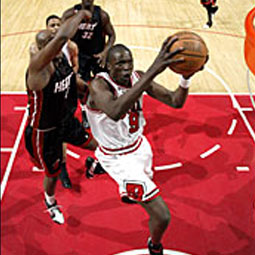 This series wasn’t supposed to happen. At least, not yet. The Bulls were supposed to earn the two seed and be rewarded with the injury-decimated Wizards, a seven-game series that would be over in one. Then only the winner of the Raps/Nets (or whatever the 3/7 would have been—I disremember all 4,893,035 possible scenarios) would have stood between them and their first Eastern Conference Finals appearance since Michael Jordan was alive.

So much for all of that.

One loss to the New Jersey Nets means the Bulls are the five seed instead of the two, facing the defending champion Miami Heat instead of the lucky-to-be-in-the-playoffs (late season injuries are a bitch) Wizards. They still have home-court advantage, thanks to their better record. And fortunately they’ve had a few days to recover from the disappointment of not getting that important 50th win.

The Bulls and the Heat are not unfamiliar foes. They faced off in last year’s first round (a series the Heat won 4-2), and again in this year’s season opener—a game which the Bulls won, um, handily, 108-66 (the worst season-opening loss by a defending champ in NBA history). Chicago went on to take the season series, 3-1, but with a couple of asterisks—Shaq missed the middle two games, and Wade only played 6:20 in the first of those, both Bulls victories. Ben Gordon led the way with 40 and 34 respectively. In the fourth game, the full-strength Heat reasserted themselves, riding a 30-18 first quarter to an eventual 33-point blowout. Shaq ended up disturbingly close to a conventional triple-double, with 24 points, nine boards and eight assists. So the regular season, despite the Bulls 3-1 advantage, was more or less a push.

Still, I gotta ride with the Bulls this year. For starters, I’m a Bulls fan and would never forgive myself otherwise. And the teams are entirely different than they were last year. In the ’06 Playoffs, the Heat were in a must-win situation, having yet to prove themselves in the postseason. And the Bulls, they were just happy to be there. They were 10 games below .500 on March 22nd, then won 12 of their last 14 to slide in as a seven seed. And they still gave the Heat hell, going down 4-2 in a hard-fought series.

This year the roles are switched somewhat. The Bulls, with their new $60 million Ben Wallace, absolutely need to get out of the first round in order for their season to be considered a success. The Heat? They hung the “Mission Accomplished” banner last season. Which probably doesn’t make much difference to D. Wade and Shaq, but you’re telling me that guys like Antoine Walker, Gary Payton and Jason Williams are as hungry this year as they were last year? No way. Not to mention the Diesel’s a year older, and Wade is too banged up to turn reckless drives into countless free-throw opportunities.

If the Bulls are gonna have a problem, it’s in the middle. They have all of one seven footer on the roster—Martynas Andriuskevicius—who was nearly killed by a punch during an NBDL game this year and played all of nine minutes in the NBA. Other than Ben Wallace, who’s gonna take on Shaq and Alonzo Mourning? Malik Allen? Michael Sweetney? On the wing, though, it’s a different story. I’ll take a healthy Gordon, Deng and Hinrich over a banged-up D. Wade and co.

So, yes, I’m taking the Bulls. I’d love to say they can get it done in five, and win on their home floor. But I think it’s more likely to go six. So. Bulls in six.

P.S. I plan on posting an alarmingly long post on the Bulls later including a TON of extra material I gathered while reporting the feature I wrote in SLAM 108. It would be a shame to let all the rambling Johnny “Red” Kerr quotes go to waste.