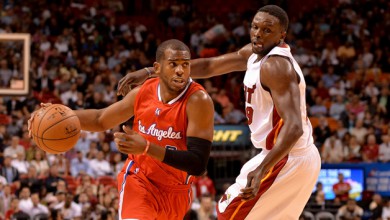 The NBA and National Basketball Players Association jointly announced Wednesday that they will hold the first NBA exhibition in Africa on Aug.1.

LA Clippers All-star guard Chris Paul and Miami Heat forward Luol Deng are scheduled to take part in the historic endeavour—the game will be played at Ellis Park Arena in Johannesburg, South Africa’s biggest city, and aired live in South Africa and other African countries according to the NBA.

Proceeds from the exhibition will benefit charities including the foundation of the late Nelson Mandela.

Deng, who was born in South Sudan, and a two-time All-Star playing for the Miami Heat, will lead Team Africa against Team World, captained by eight-time All-Star (Chris) Paul of the Los Angeles Clippers. […] “I am extremely proud to be a part of the NBA’s first game in Africa,” Deng said.

Basketball is more popular in West Africa than southern Africa, but South Africa’s main cable TV network shows live NBA games, and the NBA has visited the country regularly to hold training and development camps and charity events. […] The NBA opened an office in South Africa in 2010, establishing the country as its base to develop a foothold on a continent that still rates soccer as its No. 1 game, but has an audience that’s becoming more receptive to the NBA.