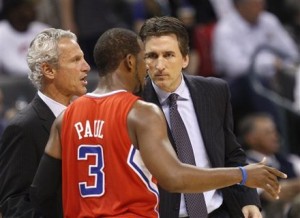 The LA Clippers continued with their losing ways last night in OKC, dropping their second in a row, and there was plenty of blame to go around.

Head coach Vinny Del Negro — whose job may be on thin ice — was overheard yelling at his team in the locker room, and then explained to the media what he thinks is wrong with the Clippers lately: a lackadaisical approah to games, poor defense and not competing hard enough.

“I think that’s my job to get him some easier baskets,” said Paul, who had 13 points (3 for 12 shooting) and 10 assists. “They guarded him well on the block. I’ve just got to figure out how I can be better, get him the ball in easier spots.”

Griffin shook his head as Paul’s reasoning. “No, it wasn’t that,” Griffin said. “I got open looks. I missed shots. Games like that happen. … They’ve got a lot of offense and they played well tonight.”

The biggest culprit in the Clippers’ woes may be the brutality of their schedule — LA has played 8 games in the last 11 nights, and they’re slated for another one tonight, plus 5 more before the month ends.

The Clip Show will need to find a way to cobble wins together soon, before they suddenly find themselves out of the Playoff picture.