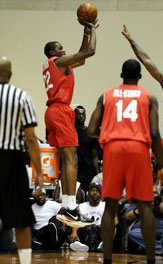 Kevin Durant has been lighting up the summer circuit during the NBA lockout and today he is scheduled to join the court just miles from his birthplace when he and some of the league’s finest take part in D.C.’s Clash of Superstars. Said to join Durant will be John Wall, James Harden, Kemba Walker, DeMarcus Cousins, Michael Beasley, Jeff Green, Eric Maynor, Jarrett Jack, Greg Monroe, Corey Brewer and Samardo Samuels.

I’ll be holding it down here for live updates from the game. Tip is scheduled for 3:00 pm Eastern. See you then!

So far we’ve had just a Walker and Cousins sighting. Game probably won’t tip at 3:00 pm, but when it does, I’ll be here.

We’re finally about to tip here. Not a full turnout, but we’re about to get started.

8:07: The Lakers 58th pick Ater Majok is here and has a quick four points. Our no shows include Harden, Maynor, Jack, Brewer and Samuels.

6:30: Former Hoyas Monroe and Jeff Green have the White Team charging, scoring all their team’s points. They trail 11-5.

4:07: The Black team looks superior here, getting better looks and running the floor well. Durant, Wall and Majok look great as they lead 19-16.

2:40: Beasley shows some serious athleticism with a high-flying dunk and White grabs a 20-19 lead.

0:30: The energy is picking up here as Green and Majok exchange dunks. Majok is a mystery after not playing at UConn, but he looks like he has NBA talent today.

4:00: Back here and we’ve got 52-51 White Team. Beasley looks great for the winning squad, showing both a post and mid-range game.

2:45: Marcus Ginyard throws down an alley-oop to cut the lead to one. I’m pretty sure they asked him to play about 10 minutes before the game.

1:12: Beasley, who’s been doing a lot of ball-handling for his team, takes it up the court and hits his second consecutive 3-pointer. 67-66 White.

0:00: Walker misses a jumper at the buzzer, and Black leads 69-68 at the half. Durant, Beasley, Wall and Majok look the best so far in the game.

7:25: Another 3-pointer for Beasley. He hits this one over Majok, who still has some work to do on the defensive end. 75-74 White.

5:15: Cousins shows some impressive ups, skying high to pick up a block with his team up 84-81. I’m heading down once more to get pictures. See you in the 4th quarter.

9:08: Former South Carolina Gamecock Tre Kelley is having a big second half for the Black Team. He buries a 3-pointer to push the lead to 105-101.

7:00: Beasley heads to the bench with an apparent injury. He’s holding the back of his head and appears as though he might have caught an inadvertent elbow.

4:38: Walker has the most impressive play of the day. He steals it from Cousins, runs coast-to-coast, slips, gets hit and then converts a 3-point play. 122-117 Black Team.

Most impressive players were Wall and Beasley with Majok showing some flashes.

Thanks for joining me!