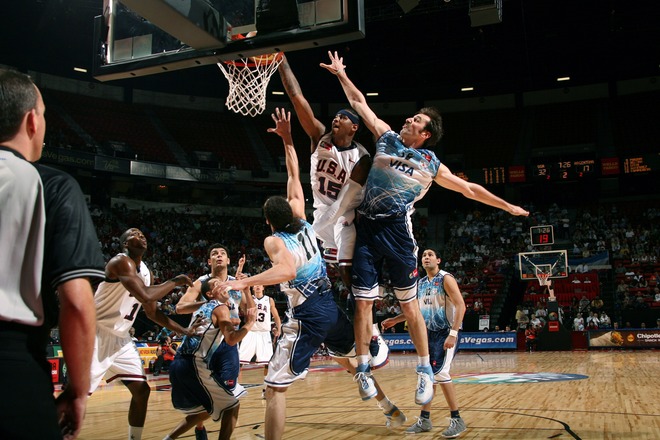 Tonight we witness the clash of the titans. Argentina v. USA. At the end of the night, barring the sudden involvement of Bud Selig, the Tournament of the Americas will have but one undefeated team. And, barring the involvement of Diego Maradona, that team will be the United States of America.

Nothing against Argentina, mind you. The defending Olympic champions are an excellent team, and have beaten NBA-star-laden US teams twice in the past six years—once in the 2002 World Championships and again in the 2004 Olympics. However, they really have nothing to gain by winning this tournament (they’re going to Beijing no matter what*) and star players Manu Ginobili, Andres Nocioni, Walter Herrman and Fabricio Oberto chose to stay home. Combine that with the fact that they had to go to overtime to beat Brazil last night while the US walked over Uruguay, this should be a rout.

If nothing else, we should get more geopolitical musings from Bill Walton. I can hardly wait!

*Apparently, this is not the case. I don’t understand the Olympics.

• As Lang has already pointed out, Argentina’s “Ride the Lightning” uniforms are horrible. They look like they’re being viewed through about three feet of chlorinated water.

• Oh yeah, Carmelo’s back after his night off.

• Mike Miller should defect to Argentina at halftime.

• Bill Walton: “What’s at stake here tonight, Jon, is who wins this game.” That’s the kind of incisive analysis I tune in for.

• Luis Scola is good. Spin move past LeBron, floater in the lane, recovers his own miss and puts it back in.

• Kobe takes a contested baseline jumper and hits. What a ballhog.

• Scola gets open underneath, receives a perfect bounce pass, drops it in.

• Kobe for three again—didn’t see it, though. Kobe leads Argentina 8-4.

• Pretty sure Bill Walton just pre-emptively accused Steve Francis and Bonzi Wells of bringing selfishness to Houston. Slow it down, big man! Maybe wait ‘til they, you know, play a game?

• Carmelo for three, while Bill Walton waxes poetic about Kobe Bryant. The first “USA!” chant of the evening starts. This is probably the biggest crowd of the tournament.

• “Kobe Bryant, to his credit, has more assists in this tournament than Chauncey Billups.” Thanks, Bill. It’s not the fact that Kobe plays with LeBron and Carmelo while Chauncey plays with Tyson Chandler and Mike Miller, is it? OK, that’s enough hating for now.

• Kobe, reverse layup, and 1. Misses the freebie. He’s got 10 points in less than five minutes.

• Kobe rebounds an Argentina miss, hucks it the length of the court to Carmelo underneath, who can’t control it. He dribbles back out, bricks a three.

• Kobe jumps, thinks, dumps off over the shoulder to Jason Kidd—his THIRD option—who fires it in to Carmelo, who’s laid out by Scola. Melo hits both, and it’s 15-6.

• Billups is in, kicks it to LeBron for three, who misses his first shot in a while.

• Argentina gets two back, Kobe comes with a finger roll.

• Scola and Billups get tangled up, Scola gets called for the offensive foul. And Kobe scores again. Scola answers over Dwight Howard—who I totally forgot was even in the game—and Tayshaun Prince hits a three.

• Steal, Amare Stoudemire, and Billups is fouled. I don’t know where all these subs came from.

• No. 15 on Argentina has an awesome Steve Stipanovich-worthy mustache.

• With two minutes left in the first quarter, Bill Walton has yet to go on a geopolitical tangent about Argentina, and I’m honestly getting concerned.

• Amare misses a contested layup, Argentina throws it the length of the court out of bounds, and Walton responds with a “goodness gracious sakes alive.”

• THREE-point goal, somebody on the USA.

• Jesus from The Big Lebowski checks in for Argentina. NOBODY f*cks with the Jesus.
• Michael Redd bricks his first three. “And that what he’s out there for!” Bill Walton being both critical AND relevant? Guess there’s a first time for everything.

• Redd misses again from closer in, and the first quarter ends with the US up 15. Which, coincidentally, is Kobe’s point total.

• Scola has three fouls already. Five means ejection. We might not see him again for a while.

• Bill Walton recommends a Jack Lemmon film to understand the problems of Argentina in the ‘70s. Um. Yeah. How about reading a book?

• Dale Earnhardt with a baseline jumper for Argentina as Dwight Howard sags off. And compounds it with an offensive foul on the other end. Dwight did not bring his A-game tonight.

• Diana Taurasi has entered the game.

• Carmelo just posterized the hell out of somebody. “Obviously the heel is bothering him tremendously!” Thank you, Jon Saunders. Can we get a replay?

• Replay, thank you. No. 11 from Argentina may want to check if he’s all there. Ouch. THAT is SLAMadamonth.

• Screen and roll with Amare broken up, Argentina pushes it and scores. LeBron one-on-one up top, pull-up three. 42-21, USA.

• Melo takes a well-deserved break, Tayshaun is back.

• Walton: “Argentina is one of the few countries that’s bi-continental.” Saunders: “And the geography lesson continues, ladies and gentlemen.”

• One of the guys on Argentina has a Jumpman tattoo on his right bicep. Amazing.

• Amare needs to think about passing when he’s got four guys swarming him. Unless rules have changed dramatically, someone’s probably open.

• Argentina only has 6/10 of 1 percent of the world’s population. And a lot of coastline. But not as much as Canada. Thank you, Professor Walton.

• The reanimated corpse of Layne Staley checks in for Argentina.

• Paraguay is one of the two land-locked nations in South America. Remind me to never play Trivial Pursuit against Bill Walton.

• Argentina misses a layup, and we’ve got a time out.

• I’m still not sure how J.J. Redick can be “perhaps the best shooter in basketball history.” BASKETBALL HISTORY!

• Dwight Howard, dunk. About time you did something, fella.

• He gets a rebound on the other end, and lays one in over the Argentine center. USA lead’s back to 21.

• LeBron blocks a Porta up-and-under layup attempt, throws an outlet pass out of bounds, and Professor Walton compares him to…Bill Russell? If Russ is watching, he’s either cackling maniacally or suffering a massive heart attack. Maybe both.

• Argentina! Length of the court, layup, putback in 10 seconds. USA by 19 at the half. With 49 points, it’s their lowest-scoring first half of the Tournament.

• I may need to skip the halftime stuff tonight for my own good. Besides, Independence Day is on FX. Dwight Howard feature? Yeesh. No thanks.

• F*ck you very much, Billy Wagner.

• Team USA is shooting 59 percent, but being outrebounded 20-15. Had Argentina hit a few more threes (they’re 1-12), this could be an entirely different game.

• Wait, Argentina ISN’T an automatic qualifier for Beijing despite being the DEFENDING OLYMPIC CHAMPIONS? Yeah, that makes sense.

• Scola is fouled underneath. Hits one of two. The USA needs to take it straight at him. Another foul and he goes back to the bench for a while.

• No matter what the results of the Tournament are, Argentina has already been voted “Team Most Resembling a Death Metal Band.”

• Carmelo, for three. Walton goes from discussing Dwight Howard to discussing the tango. And a whistle blows on a fullcourt pass from Kidd to LeBron—was he offsides?

• Melo misses a two-hander on the baseline, LeBron recovers, and flips it in while being fouled by Scola. That’s four, and he needs to be careful if Argentina’s to have any chance at all.

• Bill Walton: “Championships are won on the offensive end.” You hear that? F*ck you, conventional basketball logic.

• Amare is fouled underneath by the Argentine Bill Hanzlik.

• Kidd tries an off-the-glass alley-oop on the break, Tayshaun catches it and just gets confused. Out of bounds.

• Kobe drives baseline, tries to put it up while surrounded by 27 Argentines. Winds up laying on the floor. The word you’re looking for is “ill-advised”.

• USA throws out a swarming, trapping defense, and Argentina coughs it up. The USA can’t convert, but Argentina politely coughs it up again. Kobe, drive, finger roll, and 1. USA by 28 with 4 minutes to go in the third.

• Carlos Delfino, no three for you.

• Luis Scola! Delfino steal, and Scola again. Lead is down to 21.

• Michael Redd, corner three. Good to see ya. Saunders: “I think that’s the first time I’ve heard the shot clock go off during a USA possession!”

• Redd bricks the hell out of a three.

• Billups is bumped, Howard is fouled. Hits a pair.

• Billups is stripped, Scola misses, LeBron walks it up, drives, kicks to Redd, who misses a corner three. End of three, USA up 21.

• Kidd to Carmelo to the free-throw line. Brick, hit.

• Dwight Howard dunks while being fouled by Michael Imperioli.

• LeBron misses an alley-oop that Jason Kidd bounces off the roof of the Wynn.

• Kobe over the shoulder to LeBron, who dunks the hell out of it.

• Jason Kidd looks a lot like Andre Agassi these days. Remember when Kidd was a blonde?

• Bill Walton asserts that, on some days, Jason Kidd is the best shooter in the game. To which I say, WHAT?

• Professor Walton put together an All-Tournament (non-USA) team, which is IMMEDIATELY invalidated by the absence of Horacio Llamas.

• USA by 20, under three minutes. Lots of airhorns going off. The crowd be rowdy.

• Welcome to the game, Tyson Chandler and Deron Williams.

• The USA interior defense really sucks sometimes. Lead is 15 with under a minute to go. It’s nothing to get too worked up over, but–especially with Scola in early foul trouble–this really should have been a 30-point game.

• That’s it. Final score, 91-76. The first game of the tournament where the USA did not score 100 points. Now only Puerto Rico on Saturday stands between them and an Olympic berth.