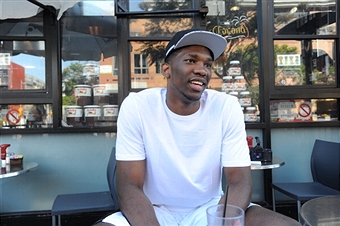 The NBA Draft is a little more than a month away, but according to ESPN’s Jeff Goodman, the Cleveland Cavaliers already have an idea of what they want to do with the No. 1 pick. The team is reportedly targeting Kansas center and former SLAM cover boy Joel Embiid over Duke guard Jabari Parker and fellow Jayhawk Andrew Wiggins.

Sources also told ESPN.com that although Embiid is first on the organization’s wish list, that doesn’t mean that Cavs general manager David Griffin — who had the interim tag lifted earlier this month — isn’t also considering Andrew Wiggins and Jabari Parker with the first pick.

Cleveland, which went into the draft lottery with a 2.4 percent chance of landing one of the top three picks, was far more focused on players who were likely to go in the middle or back end of the lottery than having to decide between Embiid, Wiggins and Parker.

With the likely departure of free agent Luol Deng, the Cavs’ most pressing need is for a skilled small forward who can shoot. However, Cleveland — which has Tristan Thompson and Anderson Varejao up front — also could sorely use a skilled big man who is able to score in the post as well as step out and make shots from the perimeter.

The Cavaliers, who have yet to name a coach to replace Mike Brown, also can offer a five-year max extension in July to All-Star point guard Kyrie Irving, the team’s best player. If he declines the offer, the Cavs could put him on the trade market.

Embiid, who played alongside Wiggins at Kansas, is also an effective two-way player who can rebound, block and alter shots.

Sources told ESPN.com that Embiid is the early front-runner for the top pick as long as his back is OK. The team’s medical personnel will get an in-depth look at him in the coming weeks.