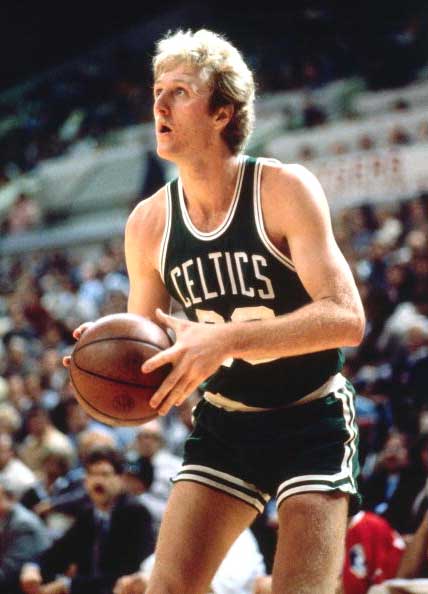 Today, one of the greatest basketball players of all time turns 55 years of age. These days he controls the ins and outs of the Indiana Pacers organization, but once upon a time Larry Bird was controlling the rock for the Boston Celtics, leading the franchise to three Championships and earning 12 All-Star selections and three Most Valuable Player awards along the way. If you’ve forgotten what made Larry Legend so special, take a look back at the feature below—originally published in SLAM 50 (April ’01)—which details his magnificent career. Happy born day, Larry!—Ed.

Who cares if the story is apocryphal? It’s a classic, anyway. Back in ’88, before his back was shot and his Celtics still made opponents quake with fear, Larry Bird arrived at creaky Chicago Stadium for the NBA’s annual three-point shooting contest. He was late. Fashionably late. But he had a reason. Bird wanted to be the last one to come into the locker room where the competition was getting dressed. Since this was hardly a playoff-caliber event, the NBA stuck them all in the same place, figuring none of these snipers—who spent their lives looking for empty space on the court—would be likely to start any trouble. Made sense—if Bird hadn’t been there.

Bird opened the locker room door, surveyed the assembled gunslingers and delivered the kind of challenge that defined his glorious career.

“Which one of you [gentlemen, for lack of a kinder word] is going to finish second?” It was a classic morsel of trash talk, spewed by one of the game’s greatest psychologists. No matter what Larry Joe Bird did on a basketball court, he knew everybody else would be trying to finish second. Even if he looked like some bumpkin who could be convinced to turn over his life savings with even the most ridiculous come-on, Bird was really running the show. He was the one living in opponents’ heads, twisting their thoughts and then killing them with every kind of shot imaginable.

There were, no doubt, some big laughs from the shooters in that locker room. Hearing that kind of talk from a guy with a milk mustache, a thatch of straw atop his head and a beak that made him seem aviary enough to live up to his last name had to make his peers chuckle. Nevermind that the basketball gods had somehow found Bird in rural Indiana and bestowed marvelous gifts upon him. Forget his college accomplishments, his pro achievements. It still made no sense. In a game that was coming to be dominated by the strong, the quick and the über-athletic, Bird somehow ruled on skill and instincts alone. He was a basketball player, not a sprinter or a decathlete.

And he was a shooter, something he proved later that evening. While the rest of the three-point gunners competed in their uniforms, Bird never removed his green Boston warmup. He glided through the prelims but needed some magic in the finals. Once again, he delivered. By the time Bird reached the last rack of five balls, in the corner, he was four points behind. Time was slipping away. Bird drilled four straight, and as the clock reached all zeroes, he launched the red-white-and-blue bonus ball. In classic fashion, he kept his right hand aloft after releasing the rock and pointed his index finger skyward. The ball swished through, giving him yet another victory in a long string of triumphs.

If there were ever an anti-SLAM hero, it would be Bird. He played for the Celtics. He grew up on a farm. He was white. Really white. Put Bird on the court, however, and he changed. His amazing self-confidence allowed him to trade smack and jumpers with the game’s finest. His amazing exploits filled highlight tapes, even if they seemed to be accomplished in slow motion. More importantly, Bird came on the scene at a time when basketball needed him most. The game was reeling in the late ’70s, the victim of sloppy play, offcourt excesses and institutional mismanagement that made pro ball a second-rate sport. You may not remember those Washington-Seattle Finals series in ’78 and ’79, but I do. Talk about your low points. Even Brent Musberger’s shrill, hype-filled broadcasts couldn’t create enough artificial excitement to make the nation care. The NBA was in trouble.

Meanwhile, in the sleepy Hoosier town of Terre Haute, hard by the Illinois border, a sensation was building. Quietly. Slowly. Remember that this was the late ’70s, when college basketball was not yet regarded with the same esteem it is now, and nationally televised games appeared on our screens once or twice a week, not five times—or more—a night. In early ’79, the NBC cameras came to Indiana State, to introduce the nation to an undefeated bunch of Sycamores who had been tearing up the Missouri Valley Conference. Let’s see: There were guards Carl Nicks and Steve Reed, forwards Alex Gilbert and Brad Miley, and coach Bill Hodges. And Bird. Mostly Bird.

The poor opponent for that showcase was Wichita State, which came to Terre Haute knowing full well the damage Bird could do but not quite clear what role it would play in the budding star’s national debut. The resulting rout satisfied everyone. The Sycamores’ fans were more than happy to go bonkers for the NBC cameras. The network was thrilled that Bird had delivered the goods. But there was one moment that defined the afternoon.

In the second half, after the game had been decided, Bird held the ball in the corner and was dogged by a Wichita State defender. He surveyed the court and faked a two-handed pass over the poor slob’s head. Ever earnest, the Wheat Shocker turned to follow the ball. One problem. Bird still had it. The assembled thousands laughed, as if they were watching a well-rehearsed Globetrotters routine. Bird paused, as if to allow the commotion to subside, and then drilled a jumper. It was all there: the innate basketball sense, the cockiness and the follow-through. America, meet Larry Bird.

By late March, ’79, we really knew the Bird Story. About the humble upbringing in dinky French Lick, IN, a town where the main exports were high school basketball and corn. About his brief, ill-fated tenure at Indiana University, where the skinny hick was no match for Bobby Knight’s buffoonery and megalomania. One has to wonder whether “Hey” Knight’s legacy of putting out substandard NBA prospects (Isiah excepted, of course) would have afflicted Bird and squelched his genius, thereby consigning him to Cheaneydom.

Bird’s move to ISU spared him any of that. And it had to gall Knight that the Sycamores made it to the ’79 Final Four, where their date with destiny and Magic Johnson awaited in the final game. For many, that one contest serves as the beginning of the modern basketball era. Just as Dorothy opened the door to her house when it landed in Oz to find a film world that was filled, for the first time, with brilliant color, so too did basketball fans discover that the game could again be filled with drama, with heroes who were larger than life. To this day, there are probably millions who watched that tilt but can’t remember which team won. They just know that Naismith’s game had been reinvented by a pair of renaissance men. From that moment, the NCAA tournament became a March obsession. One year later, the NBA would have new life, too.