The late 9-year-old Cooper Stock has a legacy that will last a long, long time. 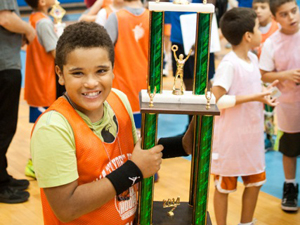 When I read about the tragic death of Cooper Dean Stock last January, I felt that dreaded (and self-involved) pang of, “It could have been me.” Nine-year-old Cooper was fatally struck by a taxicab while crossing the street holding his father’s hand.

Deaths that occur during routine, benign activities like crossing the street are alarming in a way that international assassinations will never be able to match—they make anyone who crosses streets feel vulnerable.

But I was drawn in to Cooper’s story when I read that he was a basketball aficionado and spent his summers at Walt Frazier’s BC Hoops basketball camp. That “It could have been me” shiver ran through my body again.

And when I read that Cooper’s parents Dana and Richard had focused their devastation into something amazingly positive, I became even more interested.

Creating Coop’s Hoops, Cooper’s parents decided to raise money for scholarships and financial aid to the basketball camp that so wonderfully impacted their son’s life.

As a high school English teacher who has spent the last decade working with incarcerated youth in New York, I was particularly touched by this incredible gesture. I knew how much this scholarship would help children who are so vitally in need of positive outlets.

I felt my kinship with Cooper—a child I would never have an opportunity to meet—grow and I wanted to learn more about him.

What I discovered was a vast set of coincidences and a powerfully important life lesson.

Cooper’s mother, Dana, graciously welcomed me into her home and showed me Cooper’s bedroom, which had a collage of vintage pullout posters from SLAM Magazine, several featuring Penny Hardaway—another common interest of ours.

Then Dana asked me if I was related to Alex Gabay, who is my father. It turned out that Cooper’s parents had purchased my father’s upstate New York home and that Cooper spent many years in the bedroom I used to call my own. Despite the sheer remarkability of this coincidence, I simply nodded, as though it was inevitable; I was drawn to Cooper for a reason.

As I probed further, I discovered similarities of the superficial (Cooper and I were at the same Red Hot Chili Peppers concert and were both huge Knicks fans) and the deep (Cooper and I were emotional children and amateur basketball historians).

But the more I learned about Cooper and his wonderful family, the more I aspired to be like them.

Cooper was an unusually considerate child and his interest in athletes extended beyond their on-court abilities and into their personal lives. While watching the documentary, The Doctor, Coop kept sneaking looks to Dana to see if it was safe to cry when Julius Erving discussed the death of his son.

And Cooper would be happy to hear that LeBron James is returning to Cleveland because, a few years back, he asked his mother if she was mad at LeBron for leaving the Cavs. (Dana, who is from Cleveland, explained that she also left and that is sometimes what people do.) Cooper was a Knicks fan, but couldn’t resist keeping a hidden LeBron jersey tucked away in the basement storage room of his building.

Referring to Cooper’s appreciation of the game, Walt Frazier said, “The most rewarding part of my life is when the younger generation—kids like Coop—know who I am and even tell me that I am their favorite all-time Knick.” Cooper’s mind and charm enthused other NBA greats as well, including Darryl Dawkins who made a surprise appearance at Coop’s friend’s birthday party. All the kids were aware of Chocolate Thunder, but it was Cooper who knew the “Mayor of Lovetron’s” colorful resume, stat lines and history.

But beyond Cooper’s caring nature and keen interest, his legacy is humbling and impressive. In fact, there is something paradoxical about his life, which was cut horribly short, and his legacy, which will be powerfully long.

After the loss of Cooper, his parents, along with family friends Jackie Kerns and Julie Dermer, started fundraisers at the mecca of spinning, Soul Cycle. The Coop’s Hoops fundraisers became such a success that the foundation is currently in talks with the Knicks to hold the event at Madison Square Garden.

Through the Soul Cycle benefits, online contributions and funds raised by Cooper’s sister, Gianna, and her friends, the Coop’s Hoops foundation has collectively gathered over $30,000—affecting the lives of over 45 kids. Bryanna Brown is the fastest camper; Erin Arzu, a 10th grader at MLK High, seems to never stop smiling; and Jeremy Quezada, a nationally scouted shooting guard at Calhoun Prep continues to honor Coop: “He was really a man even though he was 8 when we met. He liked movies, Led Zeppelin and basketball.” Jackie Kerns noted that Cooper instantly gravitated toward Quezada when he attempted to steal the ball from the best player in camp during a shoot-around.

In Coop’s memory, Quezada sports a pair of shoes with Coop’s name on it and, on what would have been Cooper’s 10th birthday, signed 10 basketballs with messages to Coop.

Cooper Stock’s impact can also be felt well beyond the camp and basketball court. On May 24, Cooper’s Law, sponsored by Counsel Woman Helen Rosenthal, was signed by NYC Mayor de Blasio as part of the Vision Zero initiative to cut traffic deaths by boosting the number of cameras to ticket speeders and increasing lane violations in school and residential zones. In essence, Cooper Stock will save lives by forcing drivers to change behaviors.

It’s strange. I’ve never met Cooper, but I will also never forget him. We lived in the same house (at different times), attended the same concert (in different rows) and rooted for the same team (with the same reluctance). And even though many people picked up the newspaper the day after his tragic death and thought, “That could have been me,” they probably could not have foreseen the impact Cooper would have, not just on those who knew him while he was alive, but those who will never know him and never forget him.

On the final day of Coop’s Hoops summer camp, 11-year-old Chris Rivera won the Cooper Stock Award for heart and effort. Chris’s mother, Diana Ortiz, is battling cancer and mother and son were crying as they walked off with the oversized trophy. I imagine that Cooper was looking down at the gym, letting them both know that it was safe to cry.