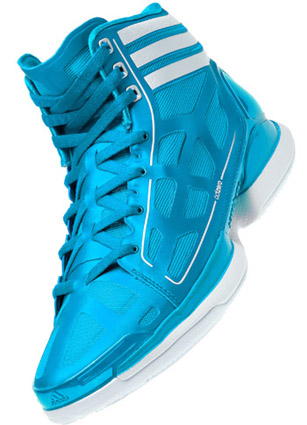 Want to win a pair of the adidas adiZero Crazy Lights? Here’s your chance. All you have to do is fill out the information on this page and become a fan of SLAM on Facebook. We’ll pick a random winner from the entrants. Why would you want a pair of the lightest basketball shoe ever? Read the review below and you’ll know why.

About six weeks ago, adidas invited me to try out  a pair of the adiZero Crazy Lights. Immediately after wearing them for the first time, I posted a quick recap online. All in all, after a lightning quick 30-minute run, I was a fan. A few weeks later, after balling in them on my own for another dozen or so hours, I penned the following further review of them for SLAM 149.

With scattered video monitors and promotional adidas signage scattered around the edge of the court—reminders of the adiZero Crazy Light introductory press conference that ended minutes prior—I laced up my test pair of Crazy Lights and prepared to ball. A pessimist by nature, I didn’t have high expectations for the kick hailed as the “lightest shoe in basketball.” No matter, though. In retrospect, I could’ve had grand expectations and the Crazy Light still would’ve surpassed them.

Weighing in at 9.8 ounces—courtesy of its revolutionary Sprintweb exoskeleton and usage of chemical bonding instead of traditional stitching—the Crazy Light is, well, crazy light, and you can feel that from the moment you first run in them. What you can also feel, though, is plenty of cushioning. So, when I attacked the basket for the first time, not only did I feel light and quick, but I felt comfortable, too. If only I wouldn’t have missed the left-handed layup after blowing by my helpless defender.

Addled with chronically sprained ankles, I’m always hesitant to go too hard in brand-new sneaks, but the Crazy Lights squelched any notion of support issues early on when, upon going after a loose ball, I was able to stop short, pivot and then cut. And while I was pumped that I picked up the ball and hit a short jumper at the other end, I was even happier that at no point did I even feel an iota of give in the ankle area.

Legs feeling light, ankles feeling anchored, I threw hesitation out the window and played all out for a bit. It was at that point—upon moving laterally at full-speed on defense and vertically on the break—that I noticed the excellent traction. Used to sliding or slipping when halting on a dime, I had no trouble stopping slide-free.

After a few successful runs—I stopped missing my layups early—I had to tip my cap to the Crazy Light, and that is something I rarely do.

Since writing that, I’ve left the shoes in a locker that I share with a few homies—who all happen to share the same shoe size as me—and a weird communal situation’s developed. When my dude O plays in the afternoon, he’ll wear them. And when I play in the evening, I wear them. Because of that situation, my Crazy Lights have gotten twice the amount of wear they should’ve gotten, but it also means that I’ve been better able to evaluate them, too.

With that in mind, here are a few more bulleted notes on the “Lightest Basketball Shoe Ever.”

-Being lightweight means that adidas minimalized the amount of material used on the shoe. But it doesn’t mean that the kick doesn’t hold up well. If anything, the opposite. From the outsole to the cushioning to the coloring, the Crazy Light is built to last.

-On an aesthetic note, the colorways really are eye-catching. I’ve definitly had more people comment on my shoes when wearing the Crazy Light than I’ve ever had before. For better or worse.

-I’ve had no problem making hard vertical or horizontal cuts, and that’s huge.

-I’m crossing my fingers on this one, but I haven’t tweaked an ankle in the slightest.

-Not surprisingly, it does hurt when people land on you, though…

-…but it’s worth the trade off when you’re flying around with only 9.8 ounces on your feet.

I’m not gonna tell you to go cop the Crazy Lights—that’s not my place at all—but I certainly recommend that you try them on for yourselves at a local sneaker store.