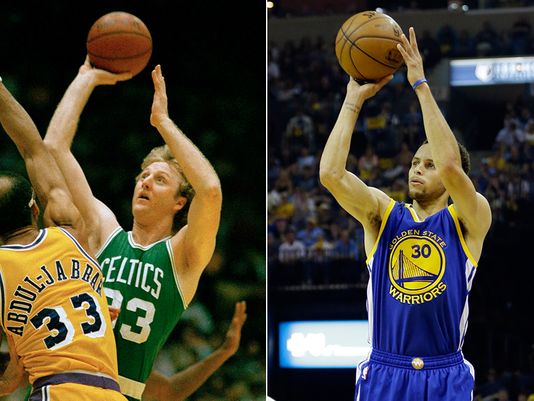 Just six seasons into his remarkable NBA career, and already, Stephen Curry is considered by many as perhaps the greatest shooter in League history.

Count Danny Ainge among those who consider Curry the G.O.A.T. at launching the rock.

Ainge, who played with Larry Bird in Boston during his legendary reign, gives Steph the nod based on the multitude of shots he has mastered.

“I think Larry was as good a shooter as I’ve ever seen before Steph. And Ray Allen is up there, too,” Ainge said. “If anybody were to come in and tell me, ‘Larry Bird‘s the best shooter of all time,’ I wouldn’t have much argument. Same with Ray. I probably wouldn’t argue. It’s really close. […] “The reason I think Steph is the best shooter of all time is simply the variety of shots he hits. Left-handed running hook shots, reverses, floaters, 3-point shots off the dribble, behind screens. It’s the variety and the degree of difficulty of the shots he hits.”

“That’s why I think Larry was always my first guy of being the best shooter of all time, up until Steph,” Ainge said. “To me, it was the difficulty of shots he made. I mean, Larry could shoot with two guys draped on him, and I used to play Larry one-on-one often before practice. I would be right on him and turn around, and the ball would be going in the basket. That’s what was always amazing to me, how he was able to create that shot and get that shot off with very little space. I see the same qualities in Steph.”

Bird chimed in on the debate back in June during the NBA Finals, and explained the difference between the two greats’ shooting mentalities.

“It’s really in different stages,” is how Bird started his answer. “He’s no doubt a great shooter from long distance and short distance. He shoots more 3-point shots than anything. Usually outside that 3-point line if you’re consistent and hit shots, people automatically think you’re a great, great shooter – which he is, no question.

“But when I played, the 3-point shot was not the biggest thing. That was the last thing we thought of when we played. Later on in my career, we shot more (3’s). My whole game was mid-range – that’s where I played. I posted up later, but down screens, 15 to 23 feet, that was my game.”

“There were some days,” Bird says, “it didn’t matter what I did out there. I couldn’t miss. I could try to miss and wouldn’t. I’d be out there working out, I’d get on a roll and say, ‘I wonder if anybody ever made this many shots in a row.’ There were days it was pretty incredible.” […] “One time I ran like 3 miles,” Bird says. “Game that night. Go out and get loosened up and shoot jumpers. I didn’t know it, but a TV station in Boston was counting. I never paid no attention. They said: ‘You know you hit 74 shots in a row?’ Nah, I can’t really remember shooting. My mind was someplace else. They ran that highlight that night in fast speed.”