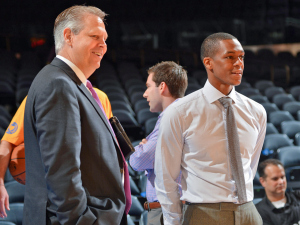 Boston Celtics president Danny Ainge discussed the possibility of trading star point guard Rajon Rondo over the weekend at the Church of Jesus Christ of Latter-Day Saints in Worcester, Mass.

Rondo’s own camp and the Celtics themselves have said they don’t envision (or want) a trade, but Ainge won’t rule anything out. (Rondo will be an unrestricted free agent next summer.) Per the Worcester Telegram & Gazette:

Ainge on if he'd trade Rondo: “The truthful answer is I really don’t know.I have no intention. I’m not trying to trade Rondo."

Ainge also said about Rondo:: The possibility of a trade is not out of the question. Nobody is untradeable, but I don’t see that happening.