D’Antoni on Eddy Curry: ‘Do You Risk It?’ 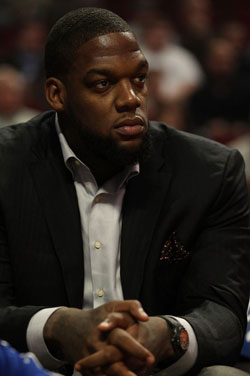 On paper, the Knicks could use another healthy body, especially a big one. But past cancers have a tendency to relapse.

But, as much as fans may hate to admit it, the Knicks could use Curry out there. It’s a tough call for Mike D’Antoni.

Marc Berman of the New York Post has the report:

Eddy Curry is ready to play, but Knicks coach Mike D’Antoni doesn’t think he is. Surprise, Curry and D’Antoni are on different pages.

Though starting center Ronny Turiaf‘s left knee is a chronic concern and rookie center Timofey Mozgov continued to regress last night, D’Antoni refuses to budge in suiting up the embattled center, who has warred with the Knicks coach for two-plus seasons.

Curry, meanwhile, is getting “antsy” and said he’s ready to rock.

“Yeah, I am. At the same we’re winning, and I’m not trying to disrupt that or disrupt anything around here,” Curry said. “It’s been a while since I played, but I haven’t been sitting around. I’ve been practicing, doing extra work to make sure I can get up and down. At the end of the day, it’s just basketball, what I’ve been doing my whole life. I don’t want to get into deserve or not deserve. I’m ready whenever he needs me.”

“Do you risk it?” D’Antoni said. “We’re playing pretty tight. We want to only do things when we’re sure. We got to get our record straight and can’t experiment right now.”

As always, there’s two sides to the coin: a) Give Curry a look if he’s actually healthy, and b) Playing Curry would send the wrong message to the rest of the team — the ones who work hard.

The best answer might be a compromise: Give Curry garbage time minutes, and quit the complaining.