Steve Kerr on David Lee: ‘He’s Just Been the Odd Man Out’ 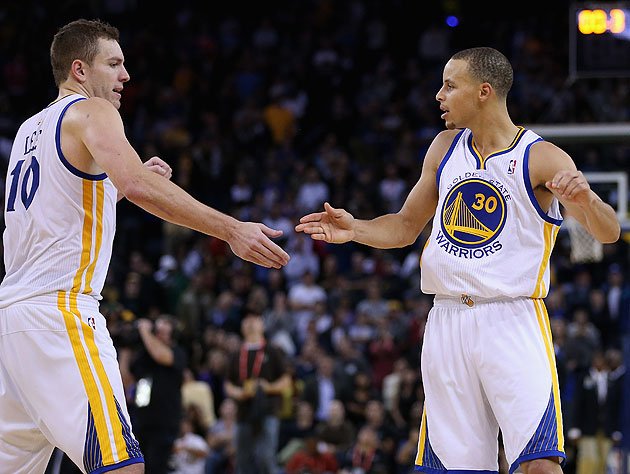 The Warriors may be 50-12, but for David Lee, this season has been one to forget. Lee played only seven minutes per game throughout the first 25 games of the season thanks to a hamstring injury. Then Draymond Green took his spot in the starting lineup and excelled, and the Warriors just never stopped winning. Now Lee is having trouble just getting off the bench. According to CSN Bay Area, it’s been hard to adjust.

He doesn’t like it, but he understands. Winning, he says, makes it easier to digest the extended periods of inactivity.

The Warriors took the floor an hour later and crushed Dallas, maintaining their firm grip on the Western Conference. Coach Steve Kerr played everybody on the roster except Lee – who had played only seven minutes in the previous game.

On Sunday, though, Lee played 19 minutes, his longest stint of the month. He was a team-worst minus-11 in a Warriors win over the Clippers.

On Monday night in Phoenix, Lee was one of two Warriors who never left the bench in a 98-80 win over the Suns.

As the Warriors play out the final five-plus weeks of the regular season, it is evident Lee is a man without a role. When the longtime starter returned on Dec. 22, after playing only seven minutes in the first 25 games due to a hamstring injury, Draymond Green had locked up the starting power forward spot.

“We’re winning and we’re having fun,” Lee said. “It’s hard at times. I couldn’t do this if we weren’t winning. But we are. I’m not going to put myself ahead of that.”

Kerr has shown a willingness to play his entire roster, depending on matchups. Chances are that at some point, Lee will be summoned.

“David’s a great guy,” Kerr said. “He’s great player. If I put him out there for 30 minutes a night, I have no doubt he’d average 18 points and 10 boards. He’d do his thing because he’s talented and skilled. But it’s all about how the puzzle fits together. And right now, he’s just been the odd man out. And it’s incredibly frustrating for him, as it should be. He’s a human being.”