DeAndre Jordan Re-Signs With the Clippers on Four-Year Deal 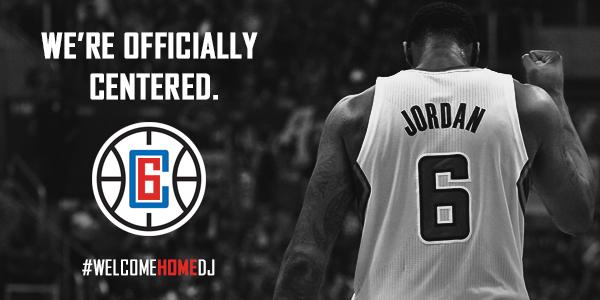 It took some drastic and hilarious measures, but in the end, the LA Clippers got their man.

DeAndre Jordan is returning to the only team he’s ever played for, reportedly coming to terms on a four-year max contract extension worth $88 million.

The Clipper players & coaches who are there stayed until it was done after midnight ET. Everybody hung out all night. Mavs never got mtg

The 26-year-old center got cold feet after having verbally committed to the Dallas Mavericks late last week—an undoubtedly devastating blow for Mark Cuban‘s organization—and decided to stick with the Clip Show.

I thought I had a good pump fake.

That's why they brought me here lol pic.twitter.com/Z64Tkiyp01

The Clippers’ contigent had a short meeitng with Jordan on Wednesday afternoon, when it became clear they didn’t need to sell him hard on reneging on his commitment to the Mavericks, sources said. He had already decided to return to the Clippers. Before long, it was clear Jordan was committed to re-signing and some visitors started to play card games for the rest of the evening. Jordan’s mother ordered out food for her Clippers guests, too, a source said.

Jordan had agreed in principle to a four-year, $80 million deal with the Mavericks on July 3, but reached out in the past 48 hours to (Doc) Rivers and expressed uncertainty about his decision to choose Dallas, league sources said. That started the chain of events that led to the Clippers traveling to Houston to meet with Jordan on Wednesday, sources said.

Rivers converged on Houston with (Steve) Ballmer and a group of players that included Blake Griffin, Chris Paul, Paul Pierce and J.J. Redick to meet with Jordan – without the presence of Jordan’s agents at Relativity Sports.