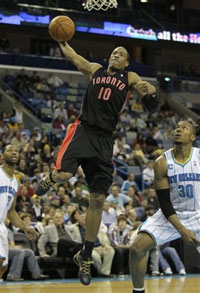 DeMar DeRozan had to earn his way into last season’s dunk contest. He competed for the final spot against Eric Gordon during halftime of the 2010 Rookie Challenge game. DeRozan wasn’t a lock for this year’s contest either, becoming the fourth participant after Brandon Jennings was forced to pull out due to injury.

participants Blake Griffin, JaVale McGee and Serge Ibaka. DeRozan received 49 percent of fan votes in the final round, as Nate Robinson bested him by the slightest margin to become the first three-time dunk champion in NBA history.

Creativity shouldn’t be a problem, since DeRozan will be coached by Darryl Dawkins—known as much for his dunks as his charisma. Dawkins has a moniker for each of his dunks and DeRozan says he has heard some of the names. Asked whether Dawkins’s creativity could provide an advantage, DeRozan says, “I think it should. And hopefully he can name all my dunks and I could come up with a theme for it ahead of time and just go out there and perform.”

Another bonus for DeRozan is that he will be performing for his home crowd in California. While childhood friend Jennings won’t be able to participate in the contest, I asked DeRozan if there may be plans to include him. “I still got time to think so if something comes to mind, he comes to me with an idea, I’m definitely open,” he says.

While DeRozan won’t have to compete for a spot this year, he is dunking to prove he belonged there in the first place.

Paying homage to former Hawk and Hall of Famer Dominique Wilkins, Josh Smith changed into a Wilkins jersey during the 2005 Dunk Contest. He did the legacy proud as Smith, like Wilkins before him, was crowned champion.

On where the idea for the jersey originated, Smith says, “It was actually the staff back here—the equipment manager, strength and conditioning coach and trainer came up with the idea.”

Smith had a few other surprises, amazing the crowd when he caught the ball as he jumped over a seated Kenyon Martin. “The first day I went out there we was able to get some practice in,” says Smith.

“You have to be creative,” he says, “You can’t just go out there and do game dunks. You have to have kind of a routine and a set plan because if you don’t, you could get in trouble quick.”

Asked if he was nervous, Smith says, “No I wasn’t nervous, I was anxious more than nervous.”

Smith received a perfect score of 50 in three of four dunks and defeated Suns forward Amar’e Stoudemire in the final round. “I was young, it was exciting, it felt good to win that dunk contest,” he says.

This year, each participant is provided with a coach. Asked if he’d ever be interested in switching over to the creative side, Smith says, “maybe one day.”

For now, his one piece of advice to the contestants: “Just complete the dunk more than anything.”