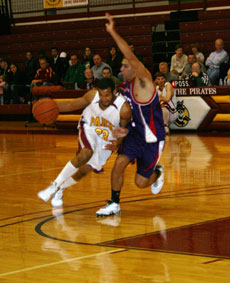 Right now, the average basketball fan is pissed off. Players and owners are fighting over millions and millions of dollars and there are people who would kill to be in their positions…by now, you know the deal.

This particular story is on the complete opposite end of the spectrum—it’s about hard work, perseverance, dedication and self belief.

I met Deron Cherry by chance at Deion Sanders Hall of Fame Enshrinement at the dinner table this summer. We briefly ran through the fact that he played basketball for the practice squad of the D-League’s Texas Legends and I said that I would consider writing a story about him.

Little did I know, but my job would be simple. Mr. Cherry wrote an entry that extended five pages on Microsoft Word—each page more inspiring than the next.

Every day, people look up to NBA players and professional athletes—they are at the pinnacle of their respective sports and, as such, are held to high standards. Fans are supposed to appreciate athlete’s lifestyles.

Sometimes people like Mr. Cherry are overlooked because they aren’t in the NBA (they aren’t famous, so who cares?). More people should care, because Deron has overcome obstacles that most NBA players certainly don’t endure.

Mr. Cherry falls down seven times, but gets up eight.

The beauty of this game that we love is that each player has their own journey at every level, and this journey helps shape them as a person. Everybody has their own stories about how they made this team, how they won that championship, or hitting that game-winning shot.

Mr. Cherry’s inspiring story is certainly worth a read.

This is the first of a two-part installment, with the second post coming Thursday.

“Height, weight, speed, strength and leaping ability all have a unit of measure, but the one thing that is immeasurable is a person’s heart.”—Deron Cherry

I grew up playing numerous sports. I played soccer, basketball, baseball and golf competitively. Recreationally I played football, tennis and volleyball. Once I reached high school, I focused my efforts on golf. I played the first two years of high school on the junior varsity team. I was the number one player on JV after my sophomore year. My high school was well known for its golf team due to its several state championship teams that it had produced over the years. I suffered an injury to one of my ribs that kept me out of golf and away from sports for the final two years of high school. I recovered from this injury after I graduated from high school.

Upon recovering I started playing basketball recreationally again while at the University of Missouri-Kansas City (UMKC), NCAA DI. Every day that I played my passion for the game increased. I then put golf aside and decided to focus all of my attention on the game of basketball.

This is where my dream to play college basketball began.

I put long hours in the gym working on my game, lifting weights and studying the game. I hadn’t played organized basketball since eighth grade at that point. I walked on and tried to make the team at UMKC my freshman and sophomore year but did not make the team even with the support of many players.

This was devastating at the time, but a friend of the family suggested that I try to venture around to some of the NAIA schools to receive an opportunity to play. I settled on Park University—an NAIA DI school located in Parkville, MO. My desire to play the game that I had fallen in love with was ignited as I transferred schools and prepared to battle to gain a spot on the team as a walk-on.

I walked on and earned a spot on the team my junior year at Park University. I worked hard to learn the offense and defensive principles because I wanted to get on the court as soon as possible. I began to excel in practice, and I consistently outplayed the guards who were ahead of me in the rotation. My coach still resisted—he didn’t play me in our only exhibition game of the year, and I didn’t play any meaningful minutes the entire first semester and a quarter of the second semester.

It got to the point where my teammates were coming up to me telling me that I should be starting and playing their positions.

I just kept working hard and prepared for whenever my number was called. My first meaningful minutes came against NCAA DII Rockhurst University. I came off the bench in the late part of the first half and finally began living my dream. I played strongly ending the first half and then came off the bench again in the second half and helped lead our team to a two-point victory, finishing the game with 19 points.

I continued playing the next three games as the first man off the bench and averaged 16 points a game. I started the rest of the year and ended the year second in scoring on our team and made the First Team Independent Conference All-American Team. I ended the regular season at home by scoring 31 points and grabbing 9 rebounds. My coach let me know my senior year would consist of me being our leading scorer and leading our team, but it turned out to be another year where I found myself on and off the bench without an explanation. The two years of being doubted by my coach made me so strong within myself about my game. I realized so much about myself over those two years, and most importantly I learned that I had what it took to play at a high level both in practice and in the games.

I didn’t have an agent, nor did I know exactly where to start, so I participated in a few tryouts throughout the nation.

I tried out for a PBL team called the Lawton Fort-Sill Cavalry, and I was invited to training camp, but I was cut after two days of the week-long camp.

I kept my head up high and then went to try out for the NBA D-League Utah Flash. I had a good tryout and got a lot of good feedback from the coaches, but I did not receive an invite to training camp. I did not fulfill my dream of playing professionally that year in ’09, so I went back to KC and worked while I continued to stay in shape and improve my game.

I moved down to Dallas, TX in May 2010 to workout and focus on trying out for the inaugural season of the NBA D-League Texas Legends. I didn’t make the roster but I was invited to join the practice squad and I accepted.

The opportunity to play against some of the best players in the world was a great experience for me. The chance to have professional experience and to learn how to be a pro was invaluable to me this past year. Hall of Famer Nancy Lieberman was the head coach, and former NBA guard David Wesley was one of the assistant coaches.

There was a wealth of information to absorb between these two alone. I enjoyed competing against some of the best players the D-League had to offer daily. The coaching and teaching has helped me to improve as a player over the past year in preparation for making a roster professionally—whether here in the D-League or professionally in another country. In between practice days, I hit the gym hard and worked on my game to stay sharp with this upcoming year at the forefront of my mind. I went to practice with the mindset that it’s another day for me to improve my own game in preparation for landing a job this upcoming season.

**Remember to check back tomorrow at the same time for Part II of Deron’s journey. You can follow him on Twitter @DeronCherryJr.