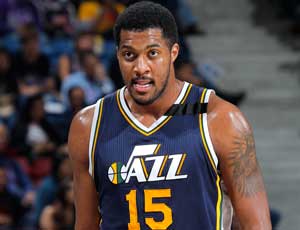 As the USA Basketball Men’s National Team kicks off mini-camp this week with 34 talents from the NBA, Derrick Favors is left wondering why he was overlooked. Even after improving his skill set since his last participation with the squad two years ago, Favors has not received another invite. More from The Salt Lake Tribune:

“‘I was frustrated for a while,’ Favors said at the team’s practice facility Monday, his feelings somewhat tempered after having a few days to digest the news. ‘Overall I got over it. They picked the guys who they wanted to get. The only thing I can do is continue to work hard, continue to work on my game and prove my point next season.’

Favors’ point is that he belongs among the NBA’s best.

The 6-foot-10 power forward participated in the USA camp during the summer of 2013 but has not been invited back. Meanwhile, Favors’ game has grown ever since, and last year he averaged 16 points, 8.2 rebounds and 1.7 blocks per game for the up-and-coming Jazz. Still, it apparently wasn’t enough to secure a camp invite over the likes of big men LaMarcus Aldridge, DeMarcus Cousins, Anthony Davis, Andre Drummond, Kenneth Faried, Draymond Green, Dwight Howard, DeAndre Jordan, Kevin Love or Mason Plumlee.

The release last week of the camp’s roster — which does include Utah swingman Gordon Hayward — prompted Jazz center Rudy Gobert to sarcastically wonder aloud on Twitter if his frontcourt partner had retired.

Rather, Favors intends to make his case on the court next season, still hoping for a coveted spot on the 2016 Olympic roster.”