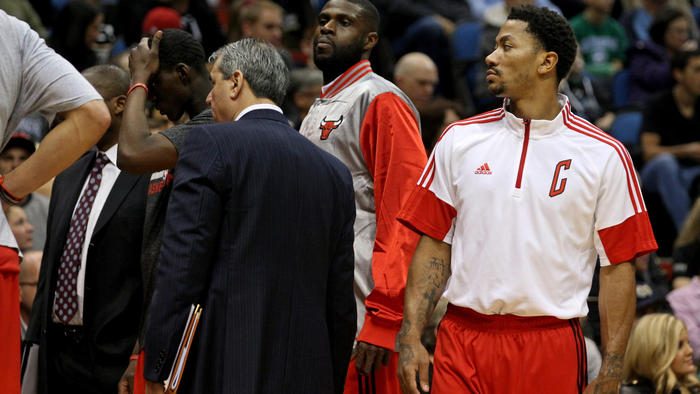 Chicago Bulls superstar guard Derrick Rose is quite understandably taking a very cautious approach with his latest comeback from injury.

Rose, for instance, won’t even dunk for a magazine photoshoot.

The 26-year old former NBA MVP is concerned about his health on and off the court, and says he’s pleased that the Bulls’ depth allows him to coast through a few games (Rose is Chicago’s third-leading scorer so far this season.)

“I wasn’t sore,” Rose said following Tuesday’s practice. “Those days off helped me just with everything, letting the areas calm down in my ankle and my foot and giving me the reassurance that everything was fine.”

Rose returned to lead the victory over the Pistons after missing four of the last five games to sprained ankles. He had said following the victory in Milwaukee that he learned he could impact the game without playing at 100 percent. […] But Rose didn’t feel right after the Milwaukee effort and missed two more games. It has been clear from the first day of training camp that Rose and the organization are taking a big-picture approach to his health after missing two seasons to knee injuries.

“I feel I’ve been managing myself pretty good,” Rose said. “I know a lot of people get mad when they see me sit out. But I think a lot of people don’t understand that when I sit out it’s not because of this year. I’m thinking about long-term. I’m thinking about after I’m done with basketball, having graduations to go to, having meetings to go to. I don’t want to be in my meetings all sore or be at my son’s graduation all sore just because of something I did in the past. Just learning and being smart.”