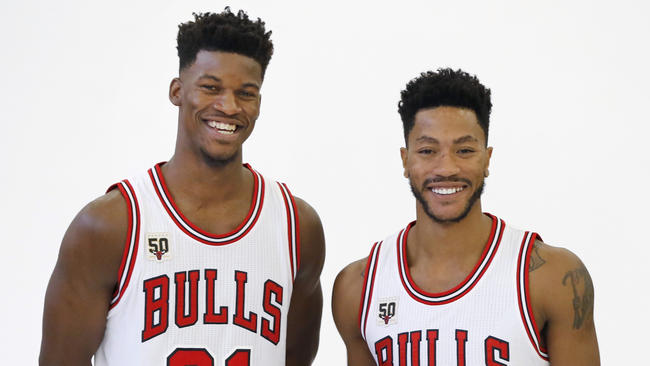 Well, if a ridiculously-expensive timepiece as a gift isn’t enough to prove that Derrick Rose and Jimmy Butler are buddies, then we don’t know what else to tell you.

Rose gave his teammate the watch to congratulate Butler for the breakout season he just had.

Butler become a first-time All-Star in 2014-15 and took home the NBA’s Most Improved Player award.

In early September, as the Bulls started trickling in before training camp for informal workouts, Derrick Rose casually and quietly presented Jimmy Butler with a gift. […] So Rose gave his backcourt mate a designer watch with a price tag college-tuition-paying parents would recognize.

“I’m a veteran now. You’re supposed to spoil your teammates. And Jimmy deserved it,” Rose said. “That’s just like me getting doughnuts for the plane and for the buses and for trips. Just trying to do something, let everyone know I’m in it to win it all. We have to have that bond.”

Told that this gesture might fly in the face of the Rose-Butler feud narrative, Rose smiled. […] “That’s so far from the truth. We don’t even talk about it,” Rose said. “It’s people just nitpicking our team, trying to start something. I look at Jimmy like a little brother. I wish him nothing but the best. I encourage him every time he’s in the game and want him to have that confidence like he has.”

Related
Jimmy Butler: ‘I Love Having Derrick Rose as a Teammate’