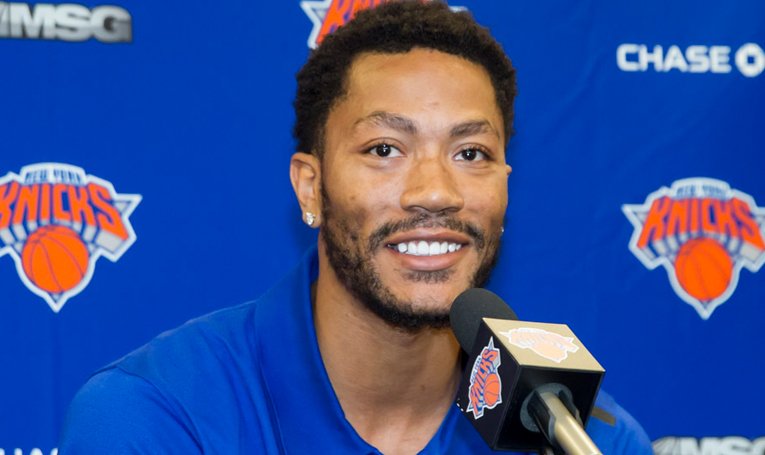 The new-look Knicks are creating plenty of excitement in New York, and according to Derrick Rose, the NBA now has two “super teams” in NYC and Golden State.

The 2011 MVP knows that expectations will be extremely high in the upcoming season.

.@drose is hype about his new team. Had a lot of good things to say about Melo, KP and Phil Jackson. pic.twitter.com/BkjZl3wxNX

Rose says he has begun working out with some of his new teammates.

Q: Knicks fans always hear about the Triangle offense. How do you think your game fits into what the Knicks are doing offensively? Or do you think the way you guys will play is even the Triangle like we’re used to hearing and thinking about it?

ROSE: “Of course, when you think about the Triangle you might think about an old-school type of way of playing basketball. Not to say it is old school, but it helped certain teams and worked out for certain teams. With us, with all the pieces that we have, it kind of fits us almost to a T. Because you have [Carmelo Anthony], you have [Kristaps Porzingis] who can post up a lot. If they was to put me in that position that would be my first time having an isolation at the elbow, or just having an isolation period. It can work that way. Then you think about the Triangle for playoffs, the Triangle for halfcourt basketball. I talked to Coach [Jeff Hornacek], and he was saying with the Triangle he would have to vary the Triangle to have a lot of pick and rolls in there at the top of the key or on the side. So it’s really whatever they decide to do, and I have to find my way around it. This is the first time I think the Triangle will really ever have an athletic point guard in that position. So who knows? All I have to do is make sure my catch-and-shoot is pretty good with this team, and like I said, be prepared.”

Q: Knicks fans always have high expectations, sometimes maybe not even grounded in reality over the years. Before last season, Melo came out on media day and talked about managing expectations with such a young team. But with this roster now and all these veterans, what should the expectations be for the Knicks?

ROSE: “They’re high. I mean, with these teams right now, they’re saying us and Golden State are the super teams, and they’re trying not to build that many super teams, and Adam Silver came out with the statement and this and that. And the expectations I think of us, we just want to win. Talking to Melo and all the guys who’ve been around. You’ve got [Brandon Jennings] who just signed for one year, he’s got to show why he’s there. I’ve got to show why I’m there. [Joakim Noah] has to show why he’s there. Everybody’s trying to prove themselves. When you’ve got a group like that, it’s like, alright, I know everybody wants to do that, but we’re going to break this down as simple as possible, and try to win every game. I think winning takes care of every category, as far as being an athlete. You look at endorsements, being on the floor, almost everything — I think winning takes care of all that. And if you’re in the league, winning takes care of all the mistakes, or if you have any problems on teams.”