Dirk Nowitzki on LaMarcus Aldridge: ‘We’d Love to Have Him’ 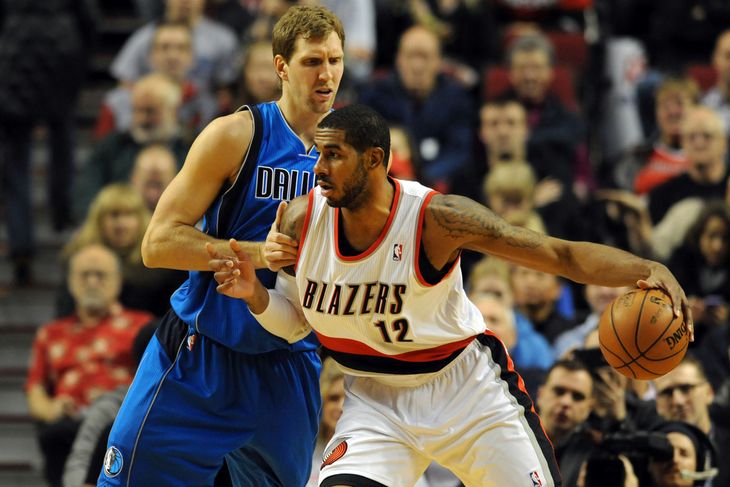 The Dallas Mavericks are considered one of the top contenders in the LaMarcus Aldridge Sweepstakes this summer, and Dirk Nowitzki says he would love to play alongside the fellow All-Star power forward.

Nowitzki, turning 37 later this week, has no interest in carrying a team by himself anymore and would welcome Aldridge to Texas with open arms.

Dirk also chimed on teammate Monta Ellis’ contractual situation—the big fella thinks Monta should opt out of his deal, and get his money as a free agent.

Nowitzki believes the 6-11 power forward would look great in a Mavericks uniform. […] “We’d love to have him,” he said at an appearance at the Mavericks Hoop Camp presented by Academy Sports at Episcopal School of Dallas on Tuesday. “He’s a great mid-range shooter. He plays bigger than he is on the defensive end. He’s a good rebounder on both ends of the floor, and on that left block he’s a beast. So I mean, he’s a really, really good player.”

Not that it’s a slam-dunk decision for the Mavericks. Aldridge turns 30 next month. He’s no longer a spring chicken, although he looks like that when compared with Nowitzki, who turns 37 on Friday. […]Age is a serious factor when evaluating free agents. The Mavericks and just about everybody else with enough salary-cap space to offer maximum contracts will have to decide between players like Aldridge and the Los Angeles Clippers’ DeAndre Jordan when the free-agent gate opens on July 1. Jordan will turn 27 next month. He’s just entering his NBA prime and has led the league the last two seasons in rebounding, where the Mavericks desperately need help.

“We’ve been ousted twice in the first round the last two years, and whatever I got to do, I’m ready to help,” Nowitzki said. “I know that, at 37, I can’t be the No. 1 option if we want to play for the championship. That’s how the cycle goes. Really, if you look at our roster, we only got four or five guys, so we got a lot of work to do. We need a little bit of everything.” […] And for those who believe Nowitzki has crystal ball access to what the Mavericks are thinking, he said: “Honestly, I have no clue what the team’s going to look like next year. But that’s part of the excitement. We’ll just see. And then we’ll go into free agency with an open mind, and with an open checkbook in [owner Mark Cuban’s] case, and hopefully get better.”