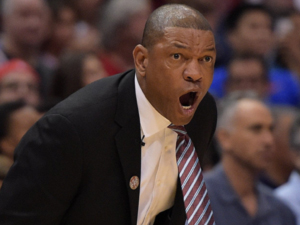 L.A. Clippers head coach Doc Rivers was one very unhappy fellow when Game 5 of the Western Conference semifinal Playoffs came to an end. Rivers took out his seething rage on the referees, reporters and even OKC Thunder majority team owner Clay Bennett. Per Yahoo! Sports:

Fresh off a stunning collapse that had pushed his Los Angeles Clippers within a game of season’s end, still fuming over a controversial replay call he would later lament as potentially “series-defining,” coach Doc Rivers marched out of the locker room late Tuesday with fury in his eyes. He headed toward the interview room only to spot Oklahoma City Thunder owner Clay Bennett walking past in the hallway.

“Wow!” Rivers yelled at Bennett. “Why can’t we get the right replay?”

Bennett, perhaps still stunned by his unlikely change in fortune, didn’t say a word in response and just kept walking.

Rivers, however, wasn’t going to stay quiet. Not after the hotly contested out-of-bounds ruling contributed to the Clippers surrendering a seven-point lead in the final 49.2 seconds of the 105-104 loss. Not after the Thunder’s improbable victory left the Clippers down 3-2 and a loss from elimination in the best-of-seven series.

The call in question came with 11.3 seconds left and the Clippers leading 104-102. Chris Paul had braced for a foul, only to have Russell Westbrook force the ball from his hands. Thunder guard Reggie Jackson drove to the rim and was hit on the hand by Matt Barnes, jarring the ball out of bounds. The officials did not call a foul on Barnes, but said the Thunder retained possession. They stopped play to look at TV replays to determine who touched the ball last.

The replays appeared to indicate Jackson had last touched the ball. The officials said otherwise, giving Oklahoma City possession. After Paul was called for a foul on a 3-point attempt by Westbrook and Westbrook made all three of his free throws, the Thunder suddenly had the lead – improbable given that they had trailed by 13 just four minutes earlier.

Rivers and the Clippers watched the replay on the arena’s overhead scoreboard as the referees – Tony Brothers, Tom Washington and Bennett Salvatore – reviewed it on a television monitor. The scoreboard had a notation that said it was the same replay angles the referees were viewing. Rivers was so confident the Clippers would be awarded the ball that he grabbed his clipboard during the timeout and drew up an offensive play.

“We saw two replays,” Brothers said. “The two replays we saw were from the overhead camera showing down, and the one from under the basket showing the same angle but a different view. And from those two replays, it was inconclusive as to whom the ball went out of bounds off of. When it’s inconclusive, we have to go with the call that’s on the floor.”

The entire Clippers bench complained in disbelief after the call. Rivers looked at Washington, who was closest to the play, and yelled, “That was you. That was our ball.” Barnes later looked squarely at Washington and said, “That was [expletive].”

Rivers and Paul said they were told by the referees that they didn’t have the right replay to change the call. That contention is likely what sparked Rivers to yell at Bennett, the Thunder owner, after the game.

“We did a lot of stuff in the game ourselves,” Rivers said. “But at the end of the day, we have a replay system that you’re supposed to look at it. I don’t want to hear that they didn’t have that replay. That’s a bunch of crap.”

“It’s probably the toughest thing I’ve been through basketball-wise,” Paul said. “It’s just me. Everything that happened there in the end is on me.”