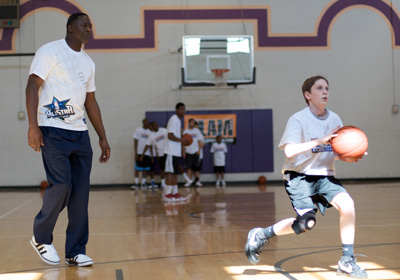 Dominique Wilkins is standing in a room filled with basketball players, ages ranging from 13-17. They’re all here, patiently sitting on the floor at 24 Hour Fitness in Dallas, ready to hear from one of the game’s all-time greats before they head to the hardwood to put in work. Happy parents line the walls around the room, cameras in hand. Nique’s in an all blue track suit, still looking powerful and strong at age 50. He asks the kids in attendance if they know what the first thing they can do to become a better basketball player is. One of the boys in the room says practice and then a phone goes off. Nique stops speaking and focuses on the kid whose ringtone interrupted his flow. “You got your phone on, in here? You got a girlfriend or something? Oh, you do—tell her to call you back.”

He goes on to say that the key to becoming a great basketball player is by working on what you’re uncomfortable with or don’t like doing. The kids listen intently. When he opens it up to questions, he’s hardly surprised at the first inquiry. “Can you still dunk?” He says he can, but won’t be attempting any today. “That’s why I wore these low tops,” he says. “I can still dunk, but the after effects aren’t the same.” After a quick autograph and photo session, the group heads down to the court. Nique runs the kids through various drills with members of his training staff, Christopher Thomas and Marlon Minifee. During one of the drills, Nique has the kids backpedal from the baseline to half court and then full sprint into a catch and shoot at the free throw line. He makes the kids go until they make two, working on their stamina and skills simultaneously. A youngster named Kendall Weigand—who made the 3-hour trek from Austin with his father Eric—hustles hard and knocks in his first two buckets. Nique’s impressed, and pats him on the head, showing love. The exchange leads to chicken skin all over my body—seeing one of my childhood heroes in a touching moment with a youngster catches me off guard.

As the clinic went on, I have a chance to speak with many of the parents in attendance. Most are impressed that the young bucks didn’t just walk into the gym firing up shots. There was work to be done before any shooting could begin. Barry Stevens, who has a 17-year-old son at the clinic, says it was an easy sell. “Luckily my son’s a basketball junkie,” he says. “He’s a subscriber to SLAM magazine and all that good stuff. I didn’t have to push too hard to get him to something like this.”

Over the next couple years, Nique and 24 Hour Fitness will operate a number of these clinics throughout the world. It’s an ambitious plan, but Nique’s passion for the game and teaching strategies, combined with his worldwide name recognition will definitely make it work.

Nique was kind enough to give me an interview during the clinic. Our Q+A is below and for the record he did get a dunk off for the kids.

SLAM: Tell us what you’re doing here today with this basketball clinic.
Dominique Wilkins: Instead of just throwing kids out to just play basketball, we want to teach them fundamental skills. I do drills that focus on endurance and shooting at the same time. What that does is help build their game as far as range. It’s how to play when they’re tired. The thing we try to do is give them little pieces of the game as they learn. That’s what development is about. Showing them the basic fundamentals and learning how to play the game on the ground as well as in the air.

SLAM: What got you interested in helping develop young basketball players?
DW: I’ve always been into it. I just wanted to put the right format together to implement it around the country and abroad, not just in my hometown. 24 hour fitness has teamed up with me to really blow this thing out in a major way. It’s also about teaching the kids life skills as well as basketball.

SLAM: It seems rare that an NBA player of your stature would want to teach the game. I’ve heard a lot of great players say that they don’t have the patience for it.
DW: I think that’s a major misconception. Most great players become great by having to teach themselves. When you can articulate that knowledge back to kids who can implement that in their own lives, you’re giving them an opportunity to do something that they love. It’s what they do now that will dictate the future.

SLAM: I thought you made a very interesting point to the kids when you were speaking with them before the camp started. You said you scored 26,000 points and they weren’t all on dunks. Obviously, many fans see the highlights and not all the hard work that needs to be put in to get there.
DW: Exactly. If you look at my career, on average I may have dunked two or three times a game. I had games where I scored 50 and didn’t get one dunk. But those dunks were so dramatic, so it looks like every play I took was a dunk. [Laughs.]

SLAM: What else are you doing right now outside of your work with these camps?
DW: I’m very involved in the pharmaceutical world as far as diabetes. I was just named ambassador for diabetes for the state of Georgia. A bill was passed in Atlanta with the state, giving me a resolution to do that. It’s a great honor and it’s something I want to give back. I want to teach people how to live with diabetes without having the problems that most people have. Diabetes is a very manageable disease. There are little things you need to do to take care of yourself. There are three components: diet, exercise and medication that will keep you healthy. Those components work together and it’s very simple.

SLAM: How did diabetes change your life?
DW: It made me play close attention to my health. If I can show people that I can do it and stay focused to do something that is good for my own health, they might be more inclined to listen and do the same thing in their lives.

SLAM: I knew I was going to catch up with you here at All-Star weekend, so before I came out I flipped through my DVD collection to see what I had in the archives on you. I pulled out my copy of the Larry Bird 25th anniversary DVD by the NBA. They have some of Larry’s full games on it and one of them was game 7 of the 1988 Eastern conference finals that had your Hawks in the Garden to face the Celts. I hadn’t seen that game in years and forgot what an amazing battle that was between two great teams. What memories do you have from that game?
DW: You know what, man? It came down to two great players that didn’t want to lose. I remember telling guys before that game—I remember it like it was yesterday—I turned around as we were walking out of the locker room and said, ‘we’re going to win this bleep-bleep game. Whoever is going to guard me tonight is going to have a long night. If you’re not ready to fight, don’t even walk out on this court.’ Unfortunately, Bird was telling his guys the same thing down at the other locker room. So it came down to who was going to make the last shot.

SLAM: Talk about Larry for a minute. Obviously, Larry and Magic had their battles and there was a recent book dedicated to it. I felt like you and Larry had something very unique as well.
DW: We did. I have a lot of respect for Larry Bird. He’s a good friend. Even from afar when we were foes, he was a guy that showed me a lot of respect as my career progressed. For me, it was a pleasure to play in the League during an era where we had some of the greatest small forwards in the history of the game, every night. Every night. And he was at the top of that list.

SLAM: Talk about your family for a bit. Three people with your surname have made the League.
DW: My brother Gerald played 14 years and my nephew Damien is currently in the League. I have two sons coming up and hopefully they will have that opportunity.

SLAM: I think that’s remarkable. It’s so hard to make it to the League and three people from your family did it.
DW: It’s about teaching those people who did it after me. Teaching them early on what to expect and how to prepare them skill wise and mentally on how to play the game.  Damien had his dad who played 14 years and his uncle that played 15 years and made the Hall of Fame. He had it right there in his backyard. I’m going to do the same with my sons.

SLAM: How much did you and Gerald push each other?
DW: Everyday. The funny thing is we pushed each other after we went to college. I never saw him play in high school. We never knew Gerald liked basketball. Honestly. One day I was like ‘damn Gerald is playing high school basketball.’ He paved his own way.

SLAM: What do you think has changed over the years when it comes to the dunk contest?
DW: The element of surprise. Instead of the props and different things, the crowd was left in suspense because you didn’t know what was going to happen. But when you set the stage up for a dunk, everybody knows what’s coming.

SLAM: Is there a dunker in the League out there that blows you away?
DW: A lot of them. LeBron James. Josh Smith. Shannon Brown—he’s a little guy that can go upstairs. [Where was it Saturday night?—Ed.] D-Wade. Guys who are just explosive. Those guys are unbelievable. Vince Carter too. Even though he’s older now and has had some knee problems, he’s still a hell of an athlete.

SLAM: Thank you for your time Dominique. I can’t begin to tell you how much of a pleasure it was to speak with you.
DW: [Smile.] Thank you.