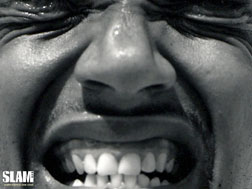 Before we get going, just want to say that I got Madden late last week and it completely and horribly ruined my weekend. I’m not really allowed to talk about the game until it comes out, but I can say that the new blocking stuff on offense is amazing. Who wants to be Kyle Turley?

“I’m a community man. Always have been, always will be.” — Nick Anderson.

THE LINKS…
• Oh, so the Cavs were planning not to improve this summer. At least they re-upped Drew Gooden today. I’d heard they were less than one million dollars apart, but neither

side wanted to budge. Looking at the numbers being reported, it seems that they met in the middle. (By the way, that’s a picture on the left of Drew from back in the day.)

• When Joe Dumars is inducted into the Basketball Hall of Fame this summer, he’ll have Isiah Thomas introduce him. Don’t you know a decade or so from now, Kobe and Shaq will make a big deal about making up and induct each other?

• The Al Harrington-to-Indiana deal is back on, though now the Hawks will receive even less in return than was originally planned before Harrington fired his agent. Look, if we’re not going to improve by trading Harrington, just let him go, Billy Knight. Can’t you at least call around and get something more substantial than a first round pick?

• Our Kevin Garnett interview from last week? Seems like someone in Minnesota finally discovered the internets. And while we’re tooting our own horn, everyone’s on the Bowen Probably Won’t Make Team USA tip.

• Here’s a novel idea: Let’s do a Sebastian Telfair feature and have him visit Coney Island!

• I like any story about a team signing someone that has to mention their height in the headline.

• In news fit for Old School Friday, the Orlando Magic have hired their all-time leading scorer, Nick Anderson, to work in their community relations department, which means he’ll be getting a check to hang around Florida and make appearances for the team.

“Besides Olajuwon, a goalkeeper for much of his youth, the country has also produced the former Nets center Yinka Dare and the current Boston Celtics center Michael Olowokandi.”

Doesn’t really seem to bode well for their chances.

• Eddie House is coming to the Swamp.