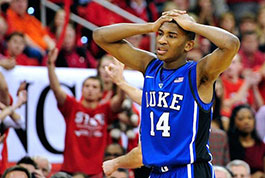 A big surprise out of Durham today, as it was announced that the No. 2 Duke Blue Devils have dismissed junior guard Rasheed Sulaimon from the program. While he is one of the program’s most tenured players, Sulaimon was sixth on the team in scoring this year, averaging 7.5 points per game. There is no word why Sulaimon was dismissed from the program, but Duke coach Mike Krzyzewski said he wasn’t able to live up to the program’s standards.

From The Herald Sun:

Duke junior guard Rasheed Sulaimon has been dismissed from the Duke basketball program as announced by head coach Mike Krzyzewski Thursday. Sulaimon remains in good academic standing and is expected to finish the spring semester.

“Rasheed has been unable to consistently live up to the standards required to be a member of our program,” said Krzyzewski. “It is a privilege to represent Duke University and with that privilege comes the responsibility to conduct oneself in a certain manner. After Rasheed repeatedly struggled to meet the necessary obligations, it became apparent that it was time to dismiss him from the program.”

Sulaimon averaged 10.0 points, 2.7 rebounds and 2.0 assists per game over 90 contests as a Blue Devil. The Houston, Texas, native posted a .391 career three-point field goal percentage (115-of-294) and scored in double-figures 49 times. Sulaimon earned ACC All-Freshman Team honors in 2013 after averaging 11.6 points and 3.4 rebounds per game. As a sophomore, he shot a career-best 41.0 percent (43-of-105) from three-point range but saw his scoring drop to 9.9 points per game due to inconsistent play on both ends of the floor.