Durant To Play All Five Positions 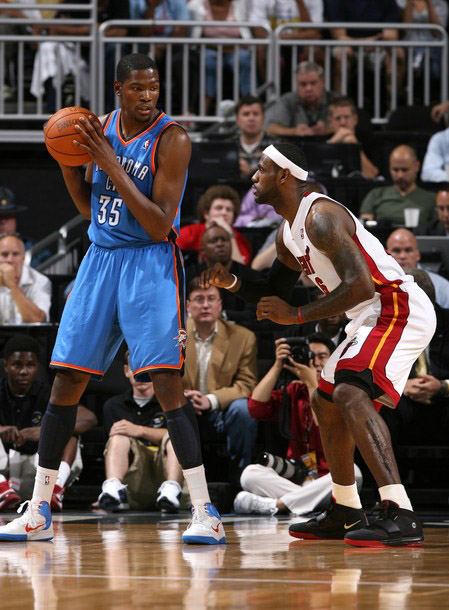 You might’ve realized by now that Kevin Durant is a pretty dangerous player. He led the L in scoring last season, dropping 30.1 points a game, and almost single-handedly earned Team USA a gold medal this summer.

And that was just at small forward.

As Darnell Mayberry writes, the Thunder may be using KD at all five positions this season:

A major development has emerged for the Thunder this preseason, and it could be the most important thing to track as the exhibition schedule marches on.

Kevin Durant is now being deployed at different positions.

In the final weeks before his fourth regular season begins, Durant is working to become more dangerous by developing his skills at multiple spots on the floor. It’s a progression that could soon make the Thunder’s offense a terror and its defense more dynamic.

Against Miami on Friday, Durant played all five positions. He started at his customary small forward spot, ran point guard late in the first quarter and slid to power forward midway through the second quarter.

“Kevin’s game is evolving,” said Thunder coach Scott Brooks. “He, like a lot of our guys, is not a finished product. He’s going to keep getting better. And there’s ways that I’m going to challenge him to get better… He has the ability to do a lot of things for us and do them well.”

It was the minutes Durant played at point guard and power forward that stood out most.

At 6-10, Durant is by far the league’s tallest provisional point guard. His size allows him to see over the defense and read and react to whatever is thrown his way. And by initiating the offense, Durant nearly becomes unstoppable because of his shooting ability and improving playmaking skills. He had only one assist against the Heat, but Durant beat LeBron James off the dribble on several possessions, working his way into the lane where he created the option to either finish himself or dump off passes to cutting teammates.

Aside from his usual role at the two or three, the Thunder will be able to play Durant at the one and slide Russell Westbrook over to the two, or put KD at the four or five and use a quicker, more athletic lineup.

Whether or not they actually use him at mutliple positions when it counts, one thing’s for sure: Oklahoma City will be one of the more versatile teams in the NBA this season.