UPDATE: Dwight Howard to Stay in Orlando for Another Season 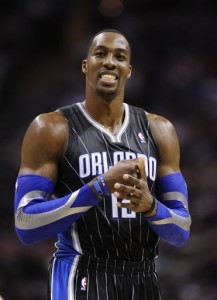 Our long, international nightmare is now officially, mercifully over: Dwight Howard will be a member of the Orlando Magic for at least another season.

Per the Orlando Sentinel and ESPN:

Dwight Howard has waived the early termination option in his current contract and will remain with the Orlando Magic for the 2012-13 season, his manager told the Orlando Sentinel on Thursday. “He is giving up all of his leverage and his free agency in a show of commitment to his team and most importantly the fans of Orlando,” said Kevin Samples, Howard’s manager. The Magic have insisted on receiving paperwork that would eliminate the clause in Howard’s contract that would enable him to end his contract a year early and become a free agent in July.

Dwight Howard just texted me that he has signed the waiver of his Early Termination Option.

Great day for the Orlando Magic and their fans.

Unfortunately, though, we’ll probably have to do this all over again when Dwight Howard becomes a free agent in the summer of 2013.

With only a few hours remaining until the 3pm NBA Trade Deadline, the 26-year old superstar center is on the verge of making the biggest decision of his basketball career.

And it doesn’t sound like he’s entirely sure what he will ulimately do just yet.

After telling his Orlando Magic teammates that he’ll “opt-in” and stick around for at least another season yesterday, Dwight Howard seemingly had a chat with his agent and changed his mind, informing team management just prior to last night’s game in San Antonio that he was still planning on opting out and becoming an unrestricted free agent this summer.

With reports swirling that that Orlando was now aggressively moving to trade him by this afternoon, Howard appeared to have yet another change of heart late last night, and told Real GM that he plans on staying with the Magic for at least another season:

“Man, listen, you know my heart, my soul and everything I have is in Orlando,” Howard said. “I just can’t leave it behind.” […] “I have gotten some bad advice,” Howard said. “I apologize for this circus I have caused to the fans of our city. They didn’t deserve none of this. I’m sorry from the bottom of my heart. I will do whatever I can to make this right and do what I was put in Orlando to do.”

“This has been a very hard time,” Howard said. “For me, my family and all of us. The fans deserve a better hero and I will make that happen. I love and appreciate my fans and this city.” Howard said that he plans on signing the ETO waiver first thing on Thursday morning. He also plans on making some internal changes to ensure this situation isn’t repeated in the future.

Of course, as the Orlando Magic very well know, this is all just talk until Dwight Howard (along with his agent Dan Fegan, who may now find himself in some hot water) actually signs on the dotted line, making his decision final.

This insane saga is far from over. Stay tuned, as always …