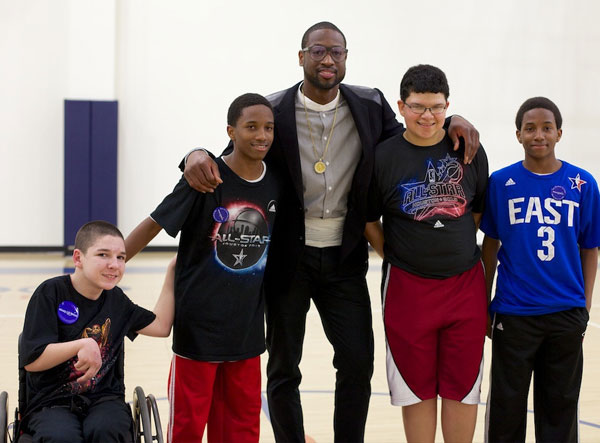 During a packed NBA All-Star weekend, two-time Champion, nine-time All-Star, author, philanthropist and fatherhood advocate Dwyane Wade, remembered the struggles he had when he was growing up and took time out to offer assistance those in similar situations.

On Friday night, guests poured into Lakewood Church in Houston to engage in a lively panel discussion, moderated by Soledad O’Brien, emphasizing the importance of fatherhood and family and addressing the issues of fatherlessness in this country. Wade teamed up with Pastor Joel Olsteen, Assistant General Manager of the New York Knicks and founder of the Allan Houston Legacy Foundation Allan Houston, former player Etan Thomas and more to discuss problems, solutions and continue their commitment to bring about change. The evening was filled with moving moments as the panelists shared testimonials and awe-inspiring messages to a captivated audience.

“Being a father to my boys is a priority to me,” said Wade. “Our Fatherhood and Family Panel Discussion at the Lakewood Church was a great opportunity for us to come together and voice the importance of fathers being active in their children’s lives.”

As a single father who went through a painful and public court custody battle with his ex-wife, which he discusses in his book “A Father First,” Wade works diligently throughout the year to inspire fathers nationwide. He was even appointed by President Barack Obama to a parenting program geared toward getting fathers to be more involved in their kid’s lives in 2011, before his court case was finished.

Wade’s compelling story of triumph through his parents’ divorce, mom’s addiction (that she has since overcome) and his sister taking him to live with their dad when he was 10 years old, allows him to share real-life, first-hand experiences with others. Wade believes that he is the man he is today because his dad “stepped up” in response to his sister’s courage and took a major role in shaping his life and career.

On Saturday, Wade continued to give back by hosting an All-Star Luncheon to raise money for the Make-A-Wish Foundation and Houston Early Age Risk Testing & Screening (HEARTS). This also doubled as an anniversary celebration for 10 Years of Service to communities throughout the United States by the Wade’s World Foundation. Yao Ming, Pat Riley and Spike Lee also came out to show their support .

SLAMonline caught up with Wade at the luncheon:

SLAM: What is your favorite thing to do with your sons?

Dwyane Wade: I just like to be one of the guys, as much as possible. We have fun together. We laugh together and joke together. So for me, obviously, basketball has become a big part of that in our lives. They love playing the game of basketball. It’s a way that I can teach them about many different areas of life. So just being one of the guys is my favorite thing to do.

SLAM: Why did you choose to name your charity “Wade’s World?”

DW: Actually, that name came from something I always wanted to do when I was a kid. I always tell the story that I used to watch Wayne’s World all the time and I was just like, Man, one day I’m going to use Wade’s World. It sounds cool. Right now it’s “Wade’s World.” I have thought about changing it to something but that depends if my boys really would take on the torch one day and maybe change it to something else.

SLAM: What was the most memorable time that you gave away to a charity?