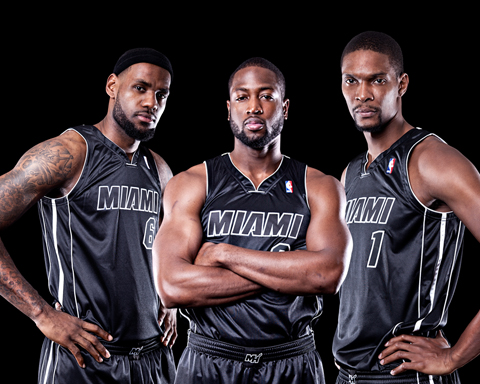 A pair of championships, four consecutive trips to the NBA Finals, and plenty of adulation. Yes, the LeBron James era in South Beach was a hell of a ride.

But it didn’t always feel great, according to Dwyane Wade.

Wade remains close friends with LeBron (and a fierce competitor of his), but says there’s a renewed sense of optimism among the Miami Heat players and coaching staff.

“It was great, you know, we went to the Finals four years in a row, and it was everything we wanted from that standpoint, but sometimes throughout that run at certain times, it just wasn’t fun,” Wade said. “Individually, it was great having certain relationships, and having my best friend here with me, but all of us didn’t have fun all the time….

He understands that no team, even a title team, has fun all the time. Nor was he the first Heat player to allude to the absence of enjoyment last season—Chris Bosh and Shane Battier expressed that emphatically in public, while other Heat players frequently did so in private.

“I don’t know,” Wade said. “It’s hard to say, man, because you want it. We wanted it. So it’s hard to say that. You don’t know exactly what’s going to come with it, but we put ourselves in that position. But sometimes you can put too much on yourself, all of us, and it becomes a black cloud around. Last year wasn’t fun. I mean, there was no stretch of it [that was] fun. That whole season, to me, it’s amazing we made it to the Finals. It’s just honest.”