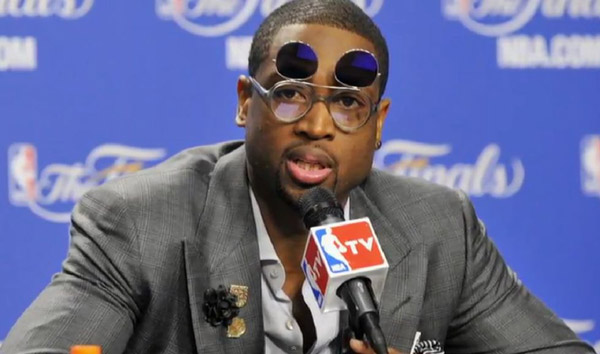 Most notably during the NBA Playoffs, pregame shots of arriving players and televised postgame press conferences have been turned into hyper-competitive fashion shows.

This, according to Miami Heat superstar guard Dwyane Wade, is largely due to former commissioner David Stern’s polarizing dress code (put into effect at the start of the 2005–06 season.)

Wade says the new sartorial rules forced NBAers to upgrade their closets. Per the AP:

“It was like, ‘OK, now we got to really dress up and we can’t just throw on a sweat suit,'” he said. “Then it became a competition amongst guys and now you really got into it more and you started to really understand the clothes you put on your body, the materials you’re starting to wear, so then you become even more of a fan of it.”

“Obviously sometimes we push the envelope, and I think it’s because we’re athletes,” he said in an interview Tuesday. “We’re not looked at as guys who should wear certain things. Being flamboyant is being OK.”

“My lady has her style and I love her elegance that she brings to it,” he said. “And I think I bring a little spice to it. Maybe that’s one of the perks of dating someone nine years younger, bring a little hipster to it!” […] Wade, 32, and [actress Gabrielle Union ], the 41-year-old “Being Mary Jane” star just returned from their two-week honeymoon in the Maldives, Tanzania and the Seychelles.