Eric Gordon on the Pelicans: ‘We’re for Sure a Playoff Team’ 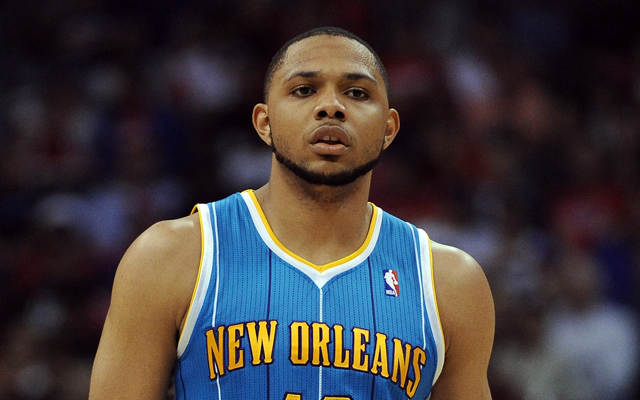 There’s just one catch, according to guard Eric Gordon: the New Orleans Pelicans have to avoid the injury bug. EG says the Pellies (who, due largely to a rash of injuries, finished with a 34-48 record last season) have what it takes to make the Playoffs in the brutal Western Conference. Per Basketball Insiders:

The Pelicans entered last season with playoff aspirations after adding (Jrue) Holiday and (Tyreke) Evans over the summer, but the team just wasn’t healthy enough to live up to the lofty expectations. Now, entering the 2014-15 season, the Pelicans should be completely healthy and they’re hopeful they can end their three-year postseason drought. Gordon, who had surgery on his left knee in April, is working out and looking forward to seeing his team at full strength. He’s confident that the team can turn heads.

“If we’re healthy, we’re for sure a playoff team,” Gordon said. “It’s all about us getting together and playing because the West is tough. We know that and realize that. It’s all about having a full season together. … That’s what we got to see this year; we’ll have a fully-loaded team and it’s about all of us being healthy. It’s crazy to see how many guys were injured this past year … We never got a chance to play a full season together. We know we’re a very talented team and [have] a lot of talented individuals, but we just have to put it together and have a good healthy season.”

“These past three years have been kind of tough, having a surgery each year to deal with in the summer,” Gordon said. “To be able to play like I am, I need a full summer where I can be able to be myself and do the things that I’m normally doing. But it’s going to come back this year. … [I’m] just working on my game, trying to get all of my explosiveness back and just looking forward to having a good year.”