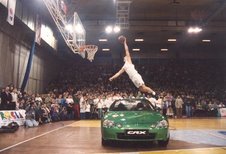 This season winning at PalaMalaguti defeating Virtus Vidivici Bologna is not exactely an upset, but Olympiacos needed this win like water in the desert. Someone said Olympiacos players are “overpaid” for the results, and maybe they’re right, but the Gershon bunch is still one of the most talented teams in Euroleague.

After the two losses by Cska and Zalgiris, Tau regained confidence in the last two weeks, defeating Virtus Vidivici Bologna last week and Prokom Trefl Sopot this week, two easy wins for the basque, who will face Montepaschi Siena in the next week Group A big match.

A strong come back for Maccabi this week in Turkey, after the home loss in the last week of 2007 by Lietuvos Rytas. The israeli yellows defeated a good team as Efes Pilsen Istanbul at Abdi Ipekci, an 83-68 strong team win.

Four wins in a row for the Arvydas Sabonis’s lithuanians. Still unbeaten at home in the season, this week Zalgiris has defeated a big contender like Montepaschi Siena, a 75-69 victory who put the Greens seriously on course for the Top16.

Ordinary administration for Le Merengues this week, with an easy win past Brose Baskets Bamberg, 54-29 at the halftime, 93-57 final. With a big rotation of all the twelve players, Plaza’s Real is still at the third place of Group C, hoping to take advantage of the next tough home games against Barcelona and Panathinaikos.

Only two loss in ten games, one in the first week (by Partizan) and one by Panathinaikos in the fourth week. Barcelona is improving, slowly but almost perfectly. Ivanovic is an exigent coach, who’s always searching for the perfection in his Blaugrana team.

An easy win on Armani Jeans Milan, a solid 89-70 who leaves Unicaja at first place of Group B tied to Lietuvos Rytas Vilnius. Sergio Scariolo continue his good job in Andalusia, looking forward to the Top16 and maybe to the north, to Madrid, in May.
3-LIETUVOS RYTAS VILNIUS (LITHUANIA)

By now there’s nothing new from Vilnius. Same old team, same old strong and impressive team. The red & black dominate last week game against Le Mans, a 85-50 victory who mathematically advance the Lietuvos to the Top16, and this could be only the beginning.

Pananthinaikos seal his admission to the Top16 with an heartbreaking win past the tough-to-die Partizan Igokea Belgrade, a 67-66 with the serbian who had 2.4 seconds and the ball to win the game. Pana needs also this kind of victories, with mentality and heart.

The loss in the third week by Union Olimpija Ljublijana is gone, a lot of time ago. Right now the Ettore Messina’s bunch is the strongest team in Euroleague, a team who’s quietly waiting (in a perfect shape) for the Top16. Will they maintain this perfect shape ’til the Final Four?

The former Boston College and Ohio State University is the MVP of this Euroleague Week, with 30 points (10/14 from the field), 6 rebounds, 3 assists and 3 steals in the Efes Pilsen loss against Maccabi Elite Tel Aviv. He scored almost the half of the total points of his team.

The australian is right now the key player for Ettore Messina. In the last week game 25 points with 11/20 from the field and 8 rebounds, money in the bank for Cska, waiting for the comeback of another key player, Matjaz Smodis.

One more time Marc Salyers, the Euroleague top scorer, this week with 30 points in the Chorale Roanne loss against Barcelona. 30 points, 11 rebounds and 3 steals for the european journeyman and Samford University product.

Great performance for Warren in the Cibona Zagreb loss to Aris TT Bank Thessaloniki. For the former University of South Carolina player 29 points with 11/17 from the field, not enough to avoid the loss for his croatian team.