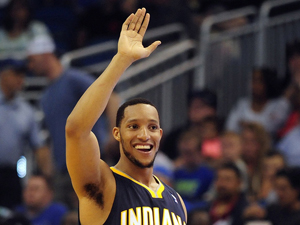 The Indiana Pacers played Game 1 of the Eastern Conference Finals without the services of guard/forward Evan Turner, who missed the game with strep throat. However, it looks like Turner will be available for Game 2. Via Pro Basketball Talk:

The struggling swingman missed Game 1 with a case of strep throat, the team said. Pacers’ coach Frank Vogel said after the game Turner could be back for Game 2.

“I do expect him to be back,” Vogel said in his postgame press conference, broadcast on NBA TV. “I mean, it’s strep throat. Hopefully he’s back by Tuesday.”

Don’t expect to see a lot of Turner. As Ben Golliver noted at SI’s the Point Forward, the Pacers are 3-0 these playoffs when Turner has gotten a DNP (there were two against the Hawks) and 7-1 this postseason when he has taken two shots of fewer.

Pacers president Larry Bird made the move to trade Danny Granger for Evan Turner at the deadline. Granger was popular in the locker room but coming off a knee surgery wasn’t contributing much. Turner, told to fire away on a weak Sixers team, had put up numbers, but asked to play within the Pacers’ system he has struggled.