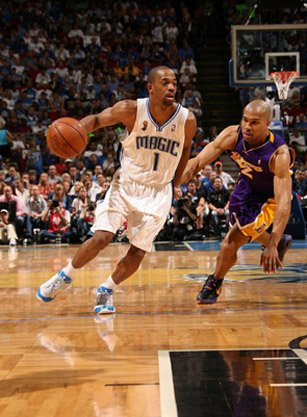 Because I’m a newspaper nerd (one of the few left, especially in the under-35 set), I derive great pleasure from one of the perks of both NBA-hosted events and decent hotels: lots of free newspapers.

Every morning that I’ve ever stayed in the “NBA Media” Hotel the road for an All-Star Game or a Finals, I always make my way to the media workroom, where I can always find that day’s version of the local paper. For the past four mornings that’s meant a nice free copy of the Orlando Sentinel, a sweetly named paper that, while owned by the struggling Tribune Corp., and sporting the tell-tale signs of said struggles (crappy paper, light on ads, $1 cover price), is doing a nice job covering the biggest local story possible: the city’s lone pro team playing in a Finals for the first time in a decade and a half.

Combine the NBA-sponsored Sentinel with the free copies of USA Today and the Wall Street Journal this Marriott hotel provides, and it’s a newspaper lover’s dream. Throw in my laptop with its online access to the LA Times site and all the online-only articles about the Finals, and as Lang said yesterday, finding stuff to read about the game we love has never been easier. Well, I can make it a bit easier: I can find it for you.

With Lang and Mutoni presumably enjoying nice weekends, and me still here in O-Town consuming the news, I figured I’d make like them and hit you guys with a bunch of good things to read on this, perhaps the penultimate day of the 2008-09 NBA season.

I’ve stubbornly said Lakers in 6 all along, and something tells me that can still happen, but obviously no one can be shocked if this thing does end tomorrow. Here’s some of what people are writing about it for now…

Magic fans are setting records with all the money they’re spending on food. Not sure if this should be taken as a compliment.

A photo gallery of celebs from the games here. A bit heavy on Rihanna and her crazy ‘do, no?

This guy is now calling the Magic’s coach Stan Van Goofy, which both speaks some truth and has a local tie-in.

Are the Magic’s struggles Jameer’s fault? Well, he’s not inserting himself into the games, I know that much.

From the Wall Street Journal:

Yesterday’s WSJ had a q+a with Magic architect Otis Smith. Dude’s had some good luck, but don’t all successful GMs? I have no problem with the props he’s getting of late.

One thing the WSJ does now is predict scores. I’ve seen a lot of these scores be way off. Today’s version is with me, though—it likes the Magic to win tomorrow, 98-97.

Phil Jackson on the brink of a remarkable record. As someone who loved following Phil and the Bulls in the ’90s, I’m happy to see him get a lot of good press.

From the L.A. Times:

A good friend of mine, who loves the Lakers, calls Derek Fisher glue. He has certainly held together a lot of big moments for the Lake Show.

And some other good stuff I saw on the web…

Bill Simmons’ diary of Game 4, from end of 3rd quarter to end of game. I’m with him that the line between Laker comeback and Magic collapse was very close.

As for SLAMonline’s original coverage of the Finals, there will be a lot more of that soon, too. We should have new pieces up by Vince Thomas and Joseph Vecsey later today, and I’ll get the Game 5 Live Blog cranking tomorrow afternoon.