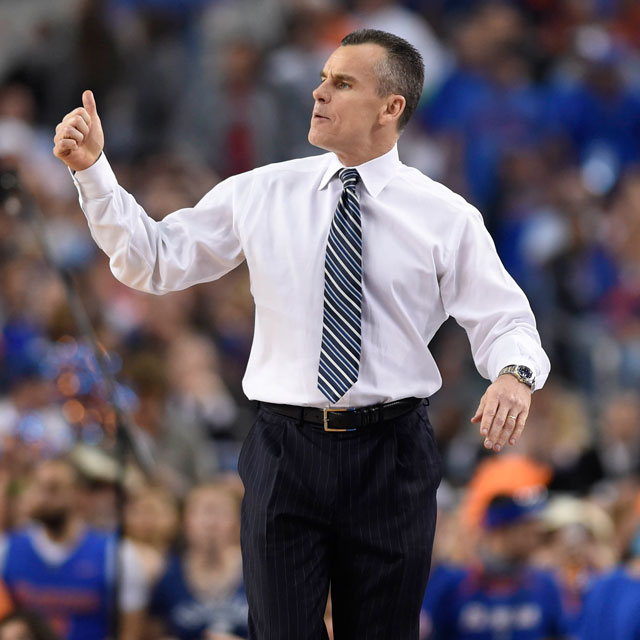 Florida head coach Billy Donovan has reportedly been a candidate for NBA head coaching vacancies in Minnesota and Detroit, and was loosely tied to the Knicks’ job, but shot the rumors of his leaving down during a recent press conference. Via the Orlando Sentinal:

Donovan said he received a few phone calls from teams and spoke to a couple of NBA teams, but added, “that’s all I’m going to say.”

Donovan would not elborate primarily because of his ill-fated foray with the Orlando Magic following the 2006-07 season. Donovan briefly accepted the job, but backed out and returned to Gainesville.

“After the Orlando situation, that’s all I’m saying. That’s it,” Donovan said. “So I’m not going to get into, ‘He’s lying, he’s not being truthful.’ I got a couple of calls, that’s all it is.”

Donovan’s success during 18 seasons with the Gators likely will make him an attractive NBA coaching candidate every spring. In April, UF reached the Final Four for the fourth time, positioning Donovan to become only the sixth coach to win three NCAA titles.

The Gators lost in the national semifinals to eventual national champion Connecticut.

“It’s always flattering,” he said. “But at the same time, I’ve always said that I’m very happy here and like it here. Jeremy has been great here. I like where our program’s at and the direction we’re going.”

Donovan did not shut the door on coaching in the NBA one day.

If the right situation arose, Donovan now is free to leave.

Donovan shot down all speculation, claiming that he plans on coaching the Gators last year.