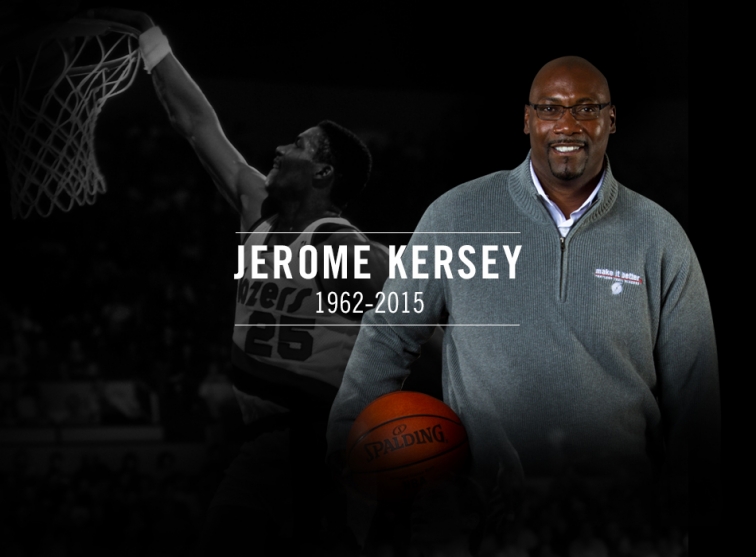 Some very sad news out of Portland: longtime Trail Blazer Jerome Kersey has passed away at the age of 52, the team announced Wednesday night.

Sad to report the Trail Blazers family has lost one of its greatest members in Jerome Kersey | http://t.co/6hQMxn49QL pic.twitter.com/HZJFM2GbCO

Kersey played 11 season in Portland, and became one of the most beloved players in franchise history.

The big fella leaves his wife Teri and four daughters.

From the press release and The Oregonian:

The cause of death was not immediately known, but his passing was unexpected, if not shocking. Kersey, who has remained a fabric of the Blazers franchise for years, made an appearance on behalf of the team Tuesday night at Madison High School, where he spoke with fellow former Blazers Terry Porter and Brian Grant about Black History Month. […] But one day later, around 5 p.m. Wednesday, the Lake Oswego Fire Department was called to Kersey’s home and he was taken to Legacy Meridian Medical Center in Tualatin. He was admitted and later died, a hospital spokesperson confirmed.

“Jerome was an incredible influence on our players as a model for life after basketball,” said Trail Blazers President of Basketball Operations Neil Olshey. “He set the bar extremely high with his long-lasting influence in this community.”

Kersey went on to play 11 seasons with the Blazers — and 17 seasons in the NBA — and is littered all over the franchise’s record books, ranking fifth all-time in scoring, third in rebounding, third in steals, sixth in blocks and eighth in assists. Only (Clyde) Drexler (867) has played more games in a Blazers uniform than Kersey (831), who went on to win an NBA Championship with the San Antonio Spurs in 1999. […] “It’s very unfortunate, very sad — he’s way too young,” Drexler said Wednesday night. “He was a great guy, a great friend, an incredible teammate and just a real pillar of the community. It’s a tremendous loss for the Blazers family and the city of Portland because everybody loved him.”