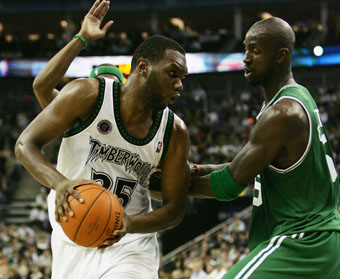 I got to the game just after tip-off at the o2 arena as every food place had a huge waiting list and I was starving.

The arena was only 3⁄4 full 2 minutes into the game but over the course of the first period it filled up.

* Getting straight to the only team anybody cares about in this match-up: The Celtics – Obviously the big three were the main attraction but it was only Jesus who showed up for what he can do. He was hitting every shot last night and it was interesting to see how many of those were wide open. If that’s the way it’s gonna roll for the Celtics all season, then the NBA better look out coz Ray will knock them down all day and night.

* KG seemed to show no emotional ties to the T-Wolves, which was unusual. I don’t know whether I wanted to see him still joking with the Wolves or whether I wanted him to be passionate for the Celtics cause. Just weird overall. But he played okay. Not a lot of points but created problems, getting doubled on almost every play and getting some smooth assists.

* Paul Pierce – Looked slightly overweight (he’s never looked in great shape) and looked lost out there. He didn’t get many great looks at the hoop and what he did get, he didn’t finish. Paul was probably the biggest disappointment tonight.

* For the Wolves, Ricky Davis was hitting everything early on and by ‘everything’ I mean EVERYTHING. Step back threes, pull up J’s, he was just feeling it. But that was the first quarter and the first quarter only. After that he didn’t do anything else. I don’t think he passed the ball once the entire game.

* Other than Ricky, the only other interesting point for Minnesota was when the inflatable headed wolf came on the court during a time-out. He bumbled around for a bit, licking people’s heads and stumbling around. As he was leaving the court he head butted a few security guards which everyone laughed about and then, just as he was about to walk down the players tunnel, a fan went WWE on his a$$! The guy clotheslined him sending him to the floor. Laughter all round.

Wondering how the Celtics bench performed? They performed okay as it goes. They looked shaky initially when they entered for the second and fourth quarters but soon got into some plays and settled down. Scalebrine looked the best bench player hitting a bunch of open shots. As for Posey? Well, he kinda disappointed…

Something to look out for as the season goes on – just how fat can Glenn Davis of the Celts get? He’s not a round mound of rebound. He’s the round mound who ways 400 pound.

Famous faces at the arena – R’N’B singer Lemar (you guys possibly won’t know him), football/soccer player – Didier Drogba got booed on front court. All credit to him, he laughed it off. A few other football players were there who no-one recognised – Nigel Reo-Coker, Hayden Mullins and Anton Ferdinand who was sitting next to F1 ace Lewis Hamilton. No-one recognised Anton but EVERYONE knew Lewis.

Most worrying point of the night – in the program for the game, the picture of Theo Ratliff for his player profile. He’s looking over his shoulder in a ‘come and get me boys’ kinda way. T-Wolves teammates… be scared.