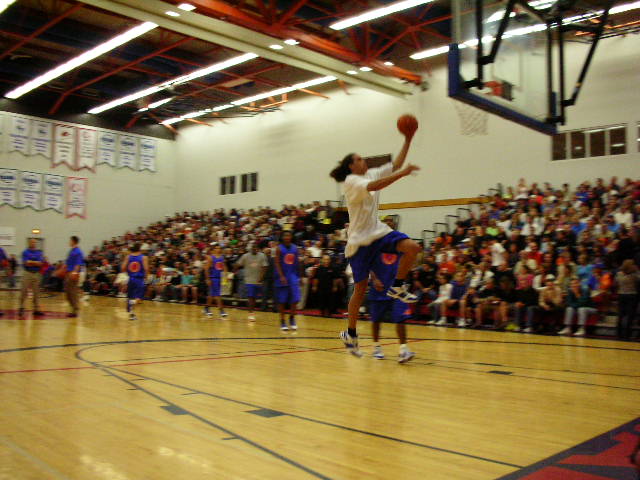 The Links has always concentrated on pro hoops, but with our new and improved site we’re trying to loosen up the reins a bit and give all levels of ball a hug. With that in mind, our original Canadian correspondent, Clement Chu, filed these notes from the Florida Gators’ exhibition game up in Canada earlier this week…

You often hear about how big-time NCAA squads will find smaller schools to beat up on during the pre-season just so that they can get some confidence, test out rotations and try new sets. If there was ever a perfect example of this, it happened this past Saturday night as the defending NCAA champs Florida Gators began their season by visiting St. Catharines, Ontario to face off against the Brock University Badgers.

St. Catharines is about 75 miles from Toronto according to Google Maps (double true) and is the hometown of supermodel Linda Evangelista, former IOC boss Dick Pound, and psychopath Karla Homolka. Just to give you some perspective, U of Florida has a student population of about 48,000, which is roughly 3 times the size of Brock University. As far as basketball goes, the Badgers were a final four team a few years ago in Canada but have fallen off a bit because of the loss of 2005 Player of the Year, Kevin Stienstra. Contrast that with the Gators, who are not only coming off an NCAA National Championship, but also returning all 5 starters and key players off the bench.

With about 45 minutes left before the tip, Joakim Noah came out to get loose by firing up a variety of set-shots and 3-pointers. Noah’s shot still has a long way to go; his elbows flare out at the side and then the ball is fired at a low trajectory toward the hoop with a snap of both wrists. Rocking an oversized icy white T like it was Wednesday in Harlem, he walked around chatting to kids on the sidelines asking for autographs and politely asked them to meet him after the game to get his signature.

As game time neared, the Gators launched into their pre-game routine:
— three Lines, 2 balls, side-shuffle and chest pass back and forth with each lane through the middle guy
— 3-man weave
— 7 in and 7 out: the starters plus the first two guys off the bench move to halfcourt and begin dynamic warm-ups (e.g. high stepping, butt and kung fu high kicks into an extended hand, etc.) while the rest of the team continuing shooting drills
— Starting from about half-court, taking one-dribble and then converting a layup/dunk

While Mobb Deep played over the modest speaker system, Noah shouted out as he ran in for a dunk: “Ain’t no such things as halfway crooks, scared to death, scared to look they shook.” It was somewhat prophetic, as that’s exactly what Brock looked like to the tune of 20 turnovers: shook.

Here are my notes from the game:
— In the lay-up line, Lee Humphrey is throwing down some crazy one-handed leaners.

— If a team only wears their practice jerseys to play against you while you’re wearing your officials, does that mean they think less of you?

— Here is a video of the Gators warming up taken by my man Sol.

— While standing during the national anthems, I realize that the coaching staff for Brock is bigger and taller than their own players — that can’t be a good sign.

— Off the opening tip, the gym is DEAD SILENT: no cheering, no taunting, no music, drums, horns, nothing. Considering there are 1,000 plus in the gym, it’s definitely a weird feeling but sort of neat because you can hear all the chatter on the court.

— Noah subs in off the bench about 4 minutes into the game.

— Next time you watch a Florida game, look at Corey Brewer’s thin legs; I don’t think I’ve ever seen anything like that since Manute Bol.

— It looks like Billy Donovan is giving his bigs the green light to handle the ball; on a number of occasions after securing a defensive rebound, Al Horford and Noah would bring the ball up themselves and throw ahead to the wings running to the hoop.

— With about 4:44 left in the half, the REAL Gators show up and play: Al Horford jumps over the backs of two players on a follow-up two-hander which sent everyone in the vicinity stumbling. On the ensuing possession, Brock turns it over and Corey Brewer does his best LeBron James one-hander impression from the right side, taking off clearly outside the key. Brock then loses possession a third consecutive time which results in an and-1 from freshman Jonathan Mitchell. Timeout Brock.

— As the halftime clock winds down to the last minute, Florida looks on as the Badgers still haven’t returned to their bench from the locker room; perhaps this is how Brock coach Ken Murray plans to meet his goal of keeping Florida under 100 points.

— 2 minutes into the half, Corey Brewer jumps the passing lane and takes off down court off one foot for a two-handed finish; the Stacy Augmon comparisons are not that far off…

— 2 minutes later, Taurean Green takes off down the right side, throws the ball high off glass to Noah trailing for the dunk — which he misses. Donovan doesn’t blink, probably because Noah pulled it off one night later against an all-star team from Guelph.

— During a timeout, Coach Murray goes ballistic on his players. “We’re playing at their pace right now and guess what? YOU CAN’T!” Now that’s what I call positive reinforcement.

— Freshman Marreese Speights is looking nice; on one play, he spun baseline on the right side about 10 feet from the hoop, took two huge strides and cup dunked it on someone from the opposite side of the rim.

Despite a valiant effort from Brock guard Brad Rootes, doing his best Steve Nash impersonation (breaking down the Florida D and handing out a game-high 7 assists), and forward Chris Keith’s 17 points, Florida did the expected and finished with a 107-51 victory.

Lee Humphrey led the Gators in scoring, knocking down 14 with 4 of them being waaay behind the arc.

In the post-game press conference, Billy Donovan summed up pretty much what both teams were hoping to get out of the experience: no injuries and a good run.

After getting props from Horford and Chris Richard for having a good game, Brock’s Chris Keith spoke to some reporters about what he got out of the experience:
“It’s not everyday you get to play a team like this — the first time out there you have your eyes open — but it’s kind of like us playing pickup and the Florida players just show up. Of course we’d want to play them. I have hopes about playing ball afterwards so to me this is a test to see if I can [play at this level]. [I think] it went well.”

The Gators then headed back to the hotel in Niagara Falls where they stayed the night and played their final Canadian exhibition game against an all-star team from Guelph, defeating them 84-55 on Sunday.