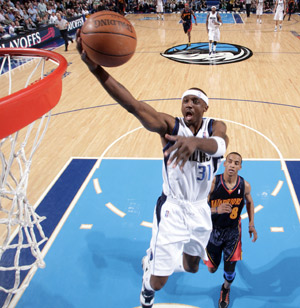 by Ben Collins
Most of the AP reports following Game 2 of the Mavericks 112-99 win over the Warriors read something like this:

“Emotions Get the Better of Warriors.”

These types of headlines should point to some overpowering, Goliathan dominance that the misleading final score might suggest anyway. Soon-to-be MVP Dirk Nowitzki probably got his life back together from that bomb of a first game and they would run more plays for him. You’d think that this game was played in the Mavericks much more experienced hands – that the top-seeded team had at least reasserted control of the only legitimate force that the Warriors had on their side: tempo.

From only these headlines and the final score, it’s pretty safe to say that Avery Johnson at least played his normal rotation, including the anointed savior of the Universe Erick Dampier, for at least 15 minutes.

No. None of those things. Not a-one.

Nowitzki’s performance was good, we guess, but we don’t remembering it happening. The same superstar who merited 40-minutes a night in the regular season went an eight-minute stretch at the end of the first quarter and into the second quarter without touching the floor. As Lang pointed out immediately thereafter, he was second in scoring for Dallas with 23, but each was compiled meticulously and most from plays that were not run through him.

That’s probably because it’s hard to run plays when trying to outrun a faster team at all times. Dampier started, but Dallas returned to small-ball for most of the breakout third quarter and the relative stretch minutes in the fourth. It worked – barely – because Golden State missed some open looks and were in some deep foul trouble for playing the same overly-aggressive, handsy defense they rolled out in game one.

Which leads us back to the headlines that don’t begin to tell the true story about composure. When Golden State lost their “cool,” they were (over)reacting to officials who gave them the benefit of the doubt on reach calls in Game 1. Baron Davis screamed and clapped his way to a first and second technical respectively. Stephen Jackson Stephen Jacksoned himself to a first and second technical shortly thereafter (and probably a league-issued fine to go along with the team-issued one given by Don Nelson today).

But they went out playing their game – the same type of pestering, usually illegal defense that earned them a Game 1 win and home-court advantage. When Baron Davis was tossed for disputing his fifth foul, the Warriors were only nine points out of a Game 2 upset.

The Mavericks no longer run the Terry-Nowitzki high pick-and-roll because they are too caught up in Golden State’s pace to even be able to run it. It’s a play that isn’t susceptible to Nowitzki’s turnaround ballhandling, which Nelson exploited in Game 1, but, since Johnson has rendered Nowitzki as ineffective in this series, he likely won’t try it again.

Johnson is also under the impression that he drew post-Game 1 criticism because he didn’t post up Erick Dampier or DeSagana Diop. So Johnson told Harris and Terry to lob a couple of passes to a double-teamed Dampier in the early going, which he inevitably fumbled because that’s not his game, and yanked the idea of having size on the floor for the rest of the game. But Charles Barkley, the common media and any Mavericks fan doesn’t want Dampier out there for that purpose. His presence forces Al Harrington to cover him and moves the impossibly undersized Stephen Jackson over to Dirk. Dampier is in there solely for strategic and cleanup purposes.

Alas, the Mavericks found a way to win anyway because they are a more talented, more experienced team playing someone else’s game. And they can probably pull that off three more times if they truly want to.

But Golden State will be secure, cool and composed in the seven games it’s going to take to get that done. No matter what the headlines read.